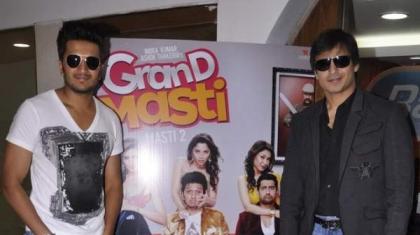 The stars of the upcoming movie ‘Grand Masti’ recently met winners of the Radio City and Book My Show contest in Bandra area in Mumbai. The cast of the movie, including Vivek Oberoi, Aftab Shivdasani and Riteish Deshmukh met the contest winners.

‘Grand Masti’ is the sequel to the original movie ‘Masti’ and this time, the makers have made an adult comedy directed by Indra Kumar. The male actors from the earlier movie have been retained for the sequel, while the actresses have been changed and will now include Bruna Abdullah, Karishma Tanna, Sonalee Kulkarni, Kainaat Arora, Maryam Zakaria and Manjari Fadnis.