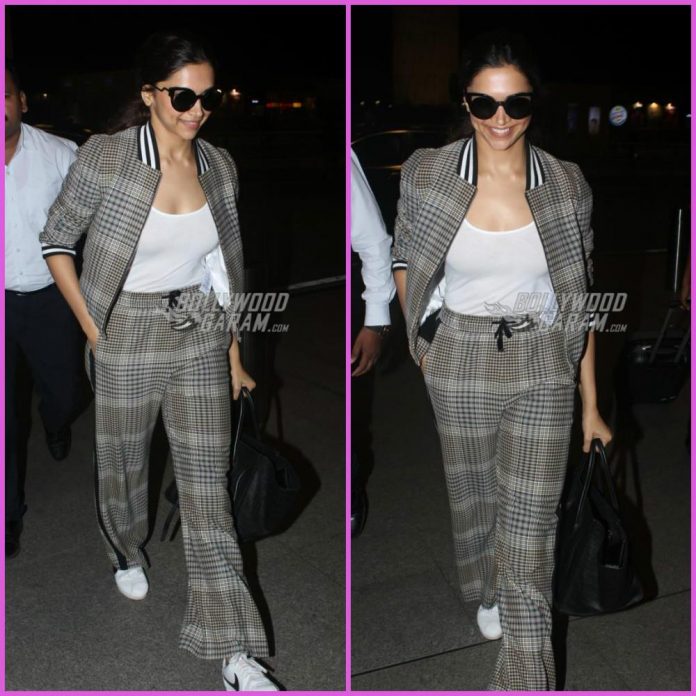 Deepika Padukone is one of the most popular and one of the highest paid celebrities in Bollywood. The actress is riding high on success with her recently released film Padmaavat, which faced a lot of backlash from a few communities in recent times. Deepika was snapped making her way at the airport in Mumbai on April 5, 2018.

The Bajirao Mastani actress looked gorgeous and stylish in a checked pants, a matching jacket with a white tank top and was heading to Dubai. Deepika was all smiles for the paparazzi as she arrived at the airport.

The actress is currently in a happy phase after the film Padmaavat, proved to be a massive success at the box office. The film also starred Shahid Kapoor and Ranveer Singh in lead roles. There were rumours in between that Ranveer and Deepika might get married this year. When asked Ranveer if the rumours were true he said, “Really, I don’t know where that’s coming from. But, yes, of course, these are things I think about. I try and create a work and life balance so as much as I consumed by my work at the moment, these things are on my mind. But, nothing decisive as of yet.”

Ranveer is currently filming for the upcoming film Gully Boy.