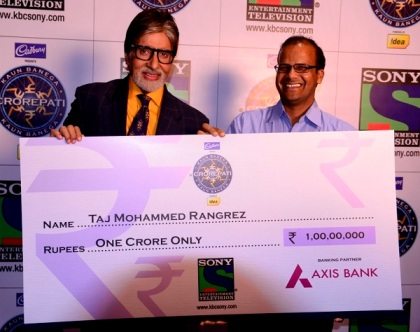 Not much time had passed since the premiere of the popular game show ‘Kaun Banega Crorepati’. The show is now in its seventh season and already has its first crorepati, as Raj Mohammed Rangrez from Udaipur won Rs. 1 crore on the show.

Rangrez is a history teacher from Udaipur, Rajasthan and has become the first contestant to win the title of Crorepati on the game show. Taj on his win said, “It is a moment to rejoice & celebrate and extremely difficult to believe that ‘I am a Crorepati’. It is splendid indeed to know that I am also the first contestant this season to have won Rs. 1 Crore.”

The winner of the show said that he was confident of the game and did not want to use his lifelines at the beginning of the game itself. Rangrez said that after winning the amount, he intends to treat his 7-year-old daughter who is partially blind.

The history teacher also stated that he wants to buy a house, educate three underprivileged girls and get two orphan girls married. On the stage, Taj was joined by his elder sister who accompanied him as a family member. The host of the show, Amitabh Bachchan appreciated the way he played and managed the game.