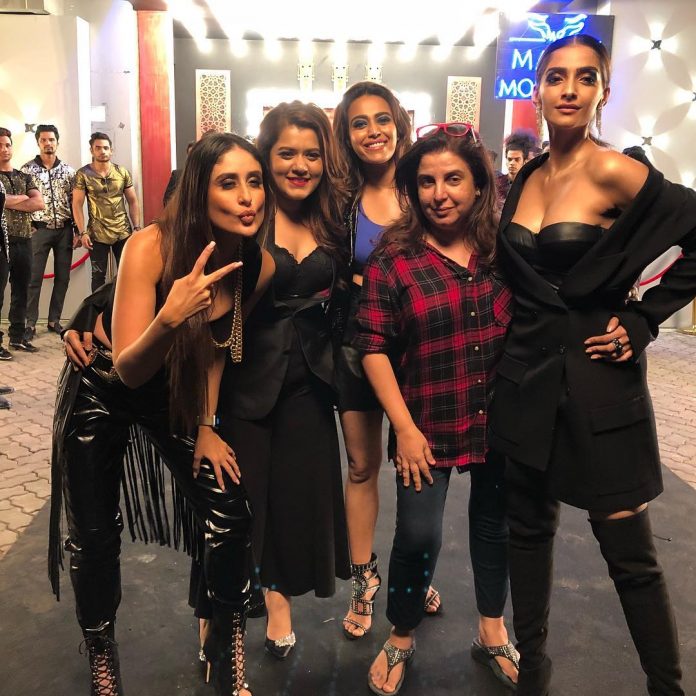 Leading ladies, Kareena Kapoor, Sonam Kapoor, Shikha Talsania and Swara Bhaskar have been shooting for a special song for the upcoming film Veere Di Wedding. The song is choreographed by Farah Khan and the audience cannot wait to get their hands on the much awaited song from the much awaited film. Swara took her Instagram account and shared a candid picture from the sets.

The song also features rapper Baadshah and is tentatively titled Tareefan. The most interesting part of the song is that it is based on the idea of role reversal like the girls take over the roles of the stereotypically assumed by the male counterparts. The team has wrapped the shoot of the song on April 13, 2018.

The picture shared by Swara has shown the girls smoking hot in black outfits. Sonam looked gorgeous in an off-shoulder bralet and a trendy black jacket while Kareena sported a black tank top and glossy black pants. Going by the pictures shared, it is surely going to be an entertainer.

Veere Di Wedding is directed by Shashanka Ghosh and is one of the much awaited films of the year. The film will also mark the return of Kareena Kapoor to films after the birth of her son Taimur Ali Khan.