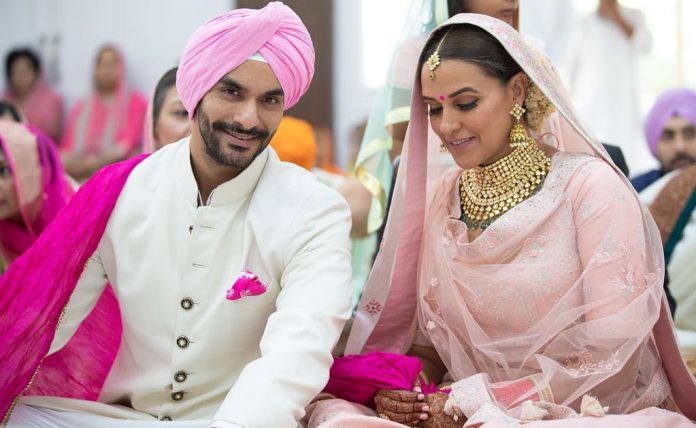 While Sonam Kapoor and Anand Ahuja’s wedding festivities are still fresh in the minds of fans, Neha Dhupia came up with a surprise for her fans with her wedding news. The actress and talk show host got married to beau Angad Bedi in a private wedding ceremony in Delhi.

Neha shared a picture of the two on her Instagram account and wrote, “Best decision of my life. Today, I married my best friend. Hello there, husband! Angad Bedi”. The picture has shown Neha and Angad getting married according to traditional Sikh rituals. Neha can be seen looking pretty as a bride in a pastel pink lehenga with some heavy jewellery and the traditional red chuda.

The groom Angad can be seen in a white sherwani with a pink dupatta and a pink turban. Some of the earlier reports had speculated about a relationship between the two, but Neha and Angad never came out about it in open. Their social media pages showed a different picture. As soon as the news broke, congratulatory messages started pouring in from the stars like Karan Johar, Soha Ali Khan, Rannvijay Singh and others.

The wedding news of Neha and Angad has come as a surprise as the relationship was well guarded and the two never spoke about their relationship in public.