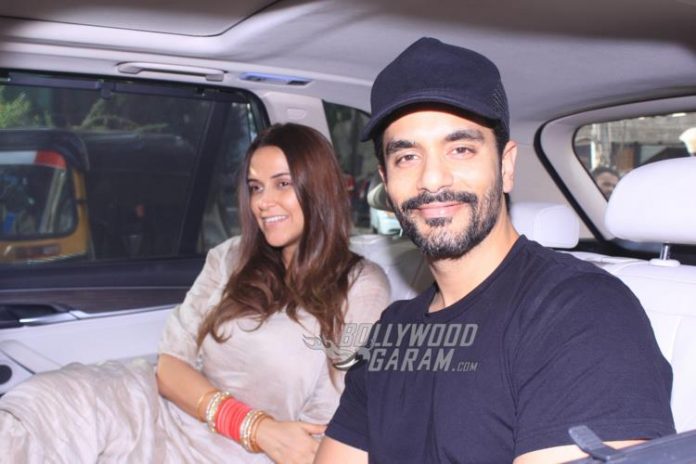 Neha Dhupia and Angad Bedi had surprised their fans with the sudden news of their hush-hush wedding in Delhi on May 10, 2018. The two had taken their respective Instagram accounts to share some adorable pictures from their wedding ceremony. The newly-weds were snapped together in Mumbai on May 20, 2018.

The couple was all smiles as they were snapped by the shutterbugs. Neha was seen in off-white casuals and was seen sporting the traditional red chuda which is worn by newly-wedded women. The actress and talk show host looked tired but managed to put up a pleasant smile for the cameras. Angad was seen in a black t-shirt, casual white track pants and a black cap.

As soon as they news of their wedding spread, congratulatory messages started pouring in. Producer Karan Johar Tweeted, “My darling and most special friend, Neha Dhupia, who l love and adore dearly is married to the gentleman and talented, Angad Bedi. Here’s wishing them decades of unconditional love.”

After the wedding, Angad and Neha made a short trip to the US for work commitments.