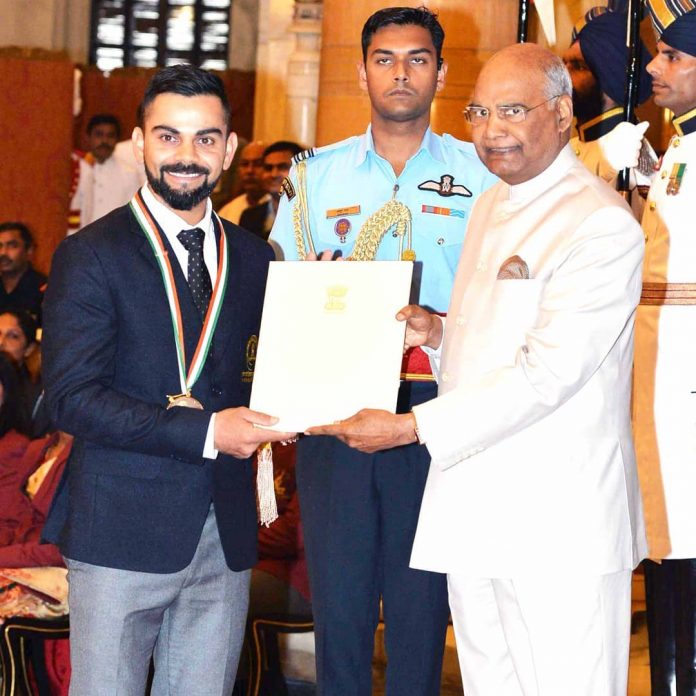 Indian cricket caption Virat Kohli received the prestigious Khel Ratna Award by the hands of the Indian President Ram Nath Kovind on September 25, 2018. Congratulatory messages have been pouring in for the cricket star since then. Virat made 6147 runs in 71 tests with 23 centuries and 9779 runs in 211 ODIs including 35 tons.

He has a combined 58 tons in International cricket and is the second one to Sachin Tendulkar (100) in the list of India’s top scorers in International cricket. Virat has been in his best form since the past three years. The award ceremony also saw the presence of Virat’s wife Anushka Sharma. The actress was seen applauding husband Virat when he received the award.

The husband and wife have always been seen together in thick and thin. Anushka and Virat are known to be a power couple and do not leave any opportunity to praise each other on social media platforms. The Pari actress was seen in a traditional sari at the ceremony while Virat looked dapper in a formal suit. The cricketer also shared a picture from the ceremony on the photo sharing site Instagram.

Meanwhile, Anushka is busy shooting for her upcoming film Sui Dhaaga – Made In India which also stars Varun Dhawan.