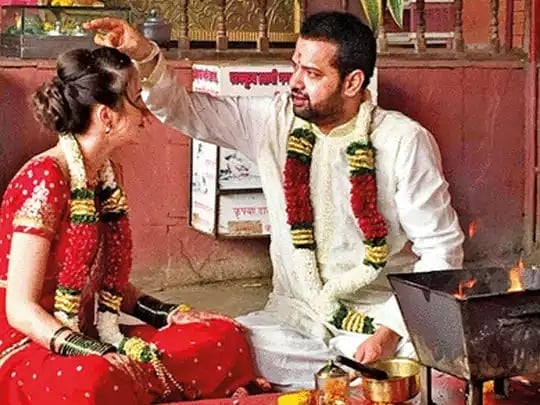 Former Bigg Boss contestant Rahul Mahajan got married to Natalya Ilina at a temple in Malabar Hill on November 20, 2018. Natalya is a model from Kazakhstan and the wedding was attended by just a few friends and immediate family members.

Rahul talked about his wedding to Natalya to a leading daily and said, “I’ve had big weddings before, but those relationships didn’t last. I’ve known Natalya for a year and a half, even though we got close recently.” The former pilot while talking about Natalya’s priorities said, “She wants to start her own business, but I’ll go with whatever she has decided to do. Family life and peace of mind is important.”

Mahajan revealed that there is an age gap of 18 years between them but looked great together. This is the third marriage for Rahul. The ex-Bigg Boss contestant was first married to Shweta Singh, who is a pilot, but they got divorced in 2008. In 2010, Rahul got married to Dimpy Ganguly, at the end of the TV reality show Rahul Ka Swayamwar, which was staged for him. However, Dimpy had left his residence in Mumbai after she describe her relation with Rahul as abusive, which involved punching, kicking and dragging by her hair.

Reports said that domestic abuse by Rahul Mahajan had started about a month after their national TV wedding.