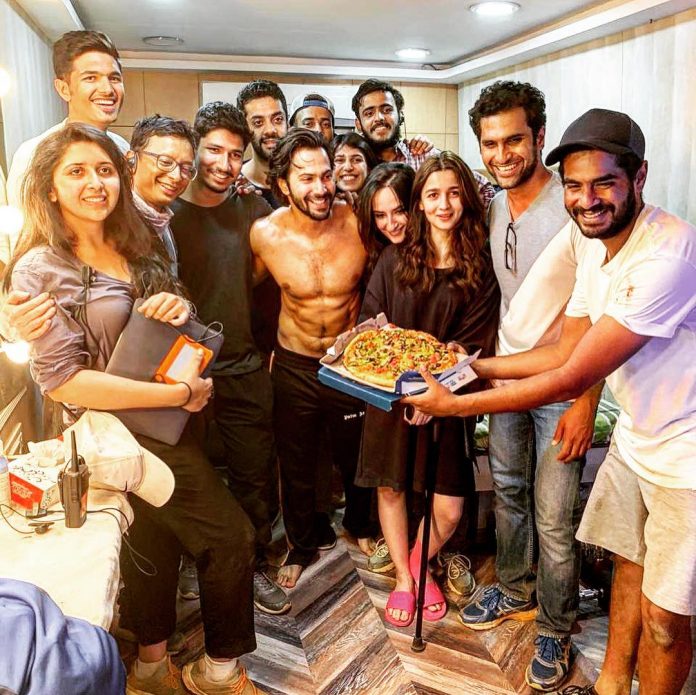 Varun Dhawan and Alia Bhatt are one of the happening and busy actors in Bollywood. The co-stars recently wrapped a schedule of their upcoming flick Kalank. The actors and their team celebrated the occasion with a pizza party.

Varun Dhawan took his Instagram account and shared a few pictures from the wrap party. The series of pictures posted by Varun showed the Badrinath Ki Dulhania actor having fun with his crew while an injured Alia Bhatt struggles to smile and pose. Varun posted a message filled with gratitude for his team and wrote, “End of a crazy sched team #kalank. This has to be the most hard working team I have ever worked with. Day night these boys and girls have given their life so I can shine bright on screen. @abhivarman just smiling cause he thinks I’m cray and @aliaabhatt with zero sleep and an Injury giving her 100 percent #teamkalank. We coming to u in 2019 get ready. April 19th. Also I got my #pizza”.

Another picture of Varun can be seen him posing with a pizza slice. Going by the pictures it can be seen that the team had a lot of fun together. The Kalank team has been regularly posting pictures about the updates with behind-the-scenes pictures. The film will mark the fourth collaboration of Varun and Alia after the blockbusters like Student Of The Year, Humpty Sharma Ki Dulhania and Badrinath Ki Dulhania.