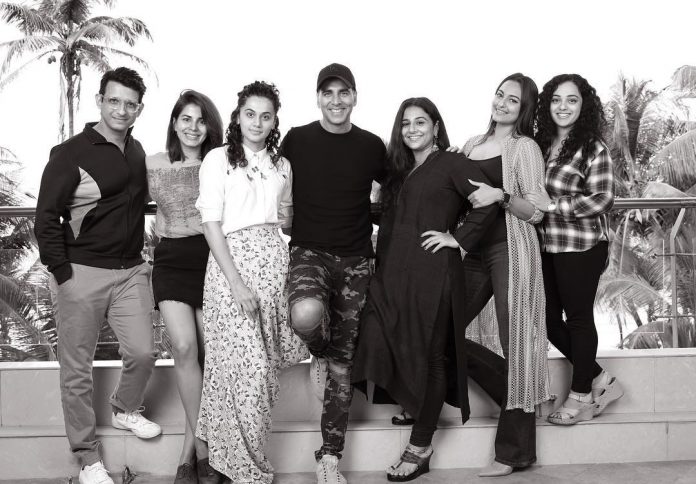 Bollywood star Akshay Kumar and the team of Mission Mangal have started shooting for the film in Mumbai on November 23, 2018. The film also stars Vidya Balan, Sonakshi Sinha, Kirti Kulhari, Taapsee Pannu and Sharma Joshi. The makers of the film are targeting Independence Day 2019 release for the film.

The film is written and directed by Jagan Shakti and produced by R Balki. Mission Mangal is based on Mangalyaan and the glorious efforts that had made it successful. Taapsee had recently shared her look from the film and was seen wearing a yellow sari with pearl earrings and a mangalsutra.

Taapsee also revealed that her character’s name is Kritika Agarwal and wrote, “Kritika Agarwal , Navigation and Communication Department, reporting on duty #MissionMangal #FirstDay #FireTheEngines”. With the introduction of the character and the subject, the audience is surely curious to know more about the story.

However, the makers might not have a smooth ride as the makers have already been hit by legal trouble even before the film went on floors. US based filmmaker Radha Bhardwaj has filed a lawsuit alleging that the script is hers and has blamed the makers for plagiarism. There are chances that the film might have a box office clash with Kalank that might take a slot after Brahmastra was shifted for a release in December 2019.