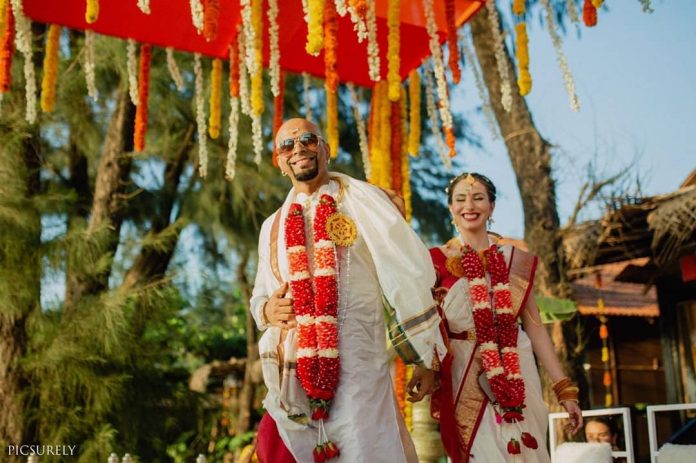 Its wedding season in Bollywood and the TV industry. TV anchor Raghu Ram of Roadies fame got married for the second time to girlfriend Natalie Di Luccio in an intimate wedding ceremony in Goa on December 12, 2018. Raghu had earlier announced his engagement to girlfriend Natalie that had took place in Canada.

The TV anchor and actor got married in an intimate South Indian ceremony held in Goa. The engagement ceremony was attended by close friends of Raghu including Karanvir Bohra and Teejay Sidhu. Radhu had first met Natalie in 2011. The actor had come to know about Natalie through her YouTube Channel and fell in love with her during the Kahin Toh Hogi Woh rendition (Jaane Tu Ya Jaane Na).

The wedding announcement was made by Raghu’s close friend Ranvijay Singh on social media with a picture of the bride and the groom. Ranvijay wrote, “Mr. & Mrs. #tukaregishaadi #natrag #bhaikishaadi..” Rannvijay and Raghu have been friends since their days on the show Roadies. The pictures on the social media have shown Raghu and wife Natalie in white and red traditional outfits.

For those who do not know much about Natalie, she is a Indo-Canadian singer and was earlier in a relationship with Eijaz Khan. She has also been a part of the Coke Studio on MTV India a nd has sung for some of the Bollywood movies like English Vinglish, Chennai Express and Ladies Vs Ricky Bahl. This is the second marriage for Raghu as he was earlier married to Sugandha Garg. The two got separated after ten years of marriage. After the divorce, the actor had posted a happy picture of the two expressing that they remain good friends even after the divorce.