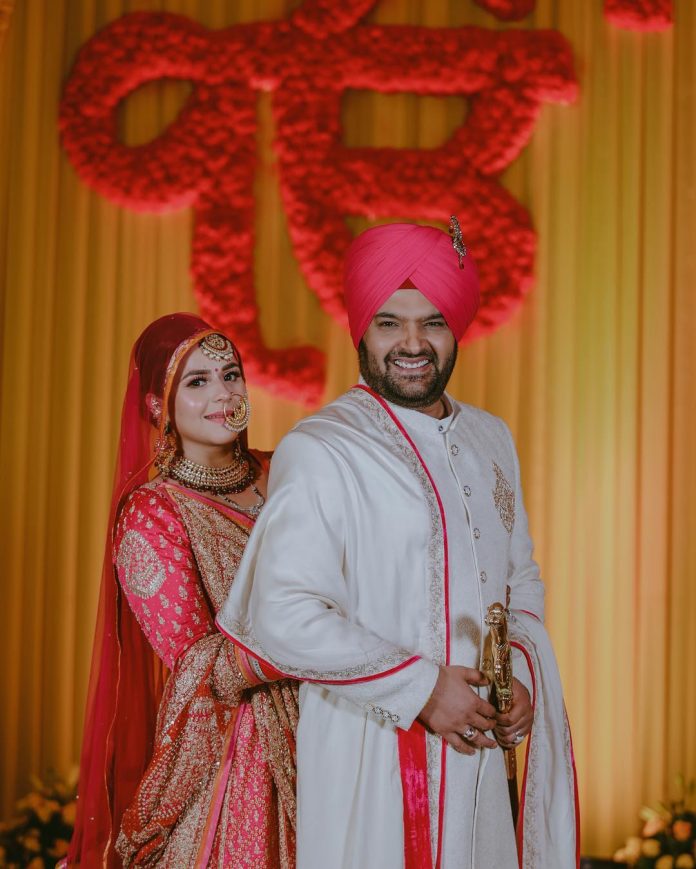 Kapil and Ginni got married in an intimate wedding ceremony which was attended by just a few close friends and family members. The actor in the latest picture can be seen in a traditional Sikh outfit with a white embroidered sherwani and a pink turban around his head and held a sword in his hand. On the other hand Gini wore a pretty pink lehenga with a red dupatta on her forehead.

The couple looked adorable as they wore color coordinated outfits on their wedding day. Kapil and Ginni also had a Hindu wedding ceremony and the pictures of the ceremony had gone viral on the internet. The wedding ceremony also saw the presence of Kapil’s friends from the TV industry including Krushna Abhishek, Sumona Chakravarti, Rajiv Thakur, Bharti Singh and her husband Harsh Limbachiyaa.

The wedding celebrations started off at Kapil residence with a traditional jagran in Amritsar. On the work front Kapil will soon be returning with his hit show The Kapil Sharma show. The show will see the return of the old cast including Sunil Grover, Ali Asgar, Sumona Chakravarti and others. Reports say that the show will be produced by Salman Khan Kapil had to earlier shut down his show citing health issues and promised that he would be back with a bang. Sharma then returned with a new show Family Time With Kapil Sharma, which could not even survive a couple of episodes. The show was also shut down. Now the actor will be returning to his old format that the audience had loved.