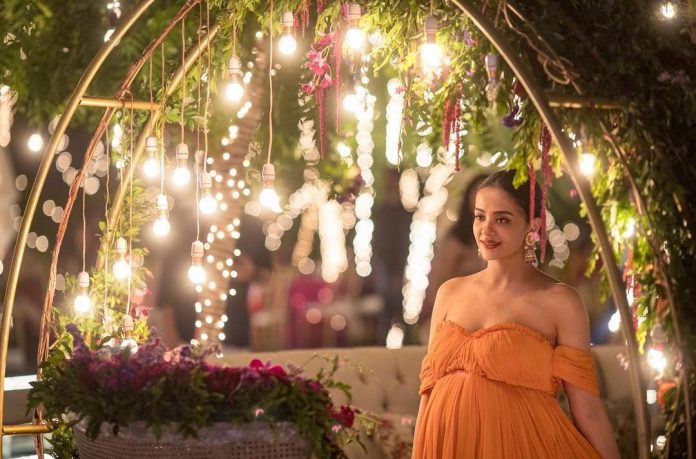 TV turned Bollywood actress Surveen Chawla has given birth to a baby girl on April 15, 2019. The actress has named her daughter Eva. A couple of months back, the actress had shared a few pictures from her baby shower and she surely looked gorgeous with her pregnancy glow. The actress made the announcement through a post on social media.

Surveen posted a picture of her daughter’s tiny feet and captioned, “We now have her tiny feet to fill the tiny shoes! Blessed by her wonderful arrival in our little family! Welcoming our daughter Eva @akshaythakker.” The actress had kept updating her fans about her pregnancy through her social media posts.

Surveen got married to businessman Akshay Thakker in July 2015 in Northern Italy and had kept her marital status a secret for a couple of years. In March, the actress had her husband threw a lavish baby shower, when she sore a pretty golden sari and posed by a chair decked with flowers.

Surveen had announced her pregnancy with a photo of two tiny shoes near a picture frame of her and her husband. The actress has worked on TV and movies. Surveen had played the lead in the TV series Kahin Toh Hoga and was also seen in the film Ugly by Anurag Kashyap.