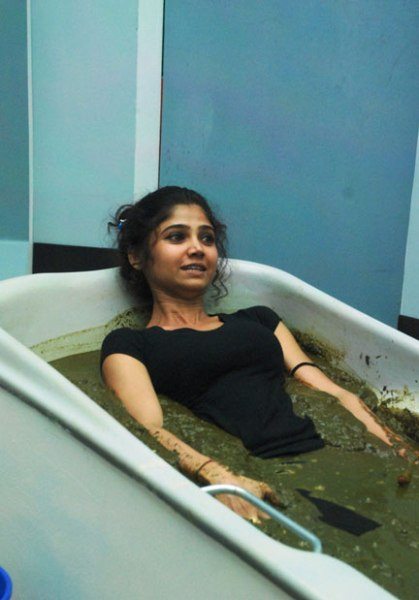 BollywoodGaram.com: Inmates who are living in the Hell side of the house of Bigg Boss 7 are facing some very cruel parts of the reality show, as the tasks are becoming more serious and much more difficult for the contestants as the time goes by. This week, the show announced a weekly task titled ‘Scientists and Guinea Pigs’.

In the latest task, the Heaven mates are the scientists and the Hell mates are the guinea pigs. Bigg Boss then announced that he has discovered a new treatment which will help in curing the infection that has spread around the house and he called Anita and Shilpa to the laboratory.

Once they entered the lab, the discovered a bath tub filled with cow dung. The scientists were then asked by Bigg Boss to name a person from the Hell side of the house who they would like to dump in the tub and if they refuse, then the Heaven mates will get a point. The Heaven mates decided on Elli, but she was visibly shocked by what she saw and refused to be dumped, due to which the Heaven mates earned a point.

After that, the scientists took Ratan’s name, who braved herself and proceeded with being soaked in the bath tub. Ratan had to stay in the tub for two hours and started singing Bollywood songs so that she forgets or distracts herself from the filth. Bigg Boss has always posed difficult challenges for the contestants on the show and this one was definitely unique.