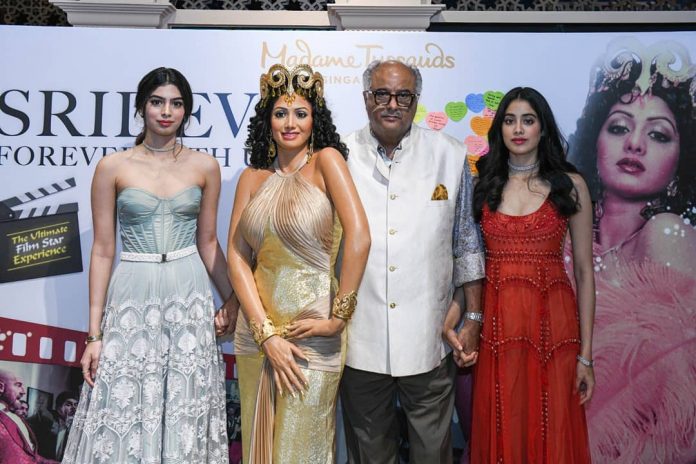 Boney Kapoor along with his daughters Janhvi Kapoor and Khushi Kapoor unveiled the wax statue of late actress Sridevi at the popular Madame Tussauds Museum in Singapore on September 4, 2019. The wax statue was a replica of the iconic look of Sridevi from the song Hawa Hawai from the film Mr. India.

Boney was visibly emotional at the unveiling event and had also teased the wax statue on his social media account. The pictures from the unveiling event, has shown Boney standing in disbelief besides the statue. Janhvi can be seen trying to put up a smile for the cameras. Another picture has shown Janhvi admiring the details of the wax figure.

Madame Tussauds collected messages from fans across the globe and pinned it to the tribute wall at the launch event. The museum had earlier announced that it will be installing a wax statue of the legendary actress on her birth anniversary. The official Twitter handle of Madame Tussauds wrote, “As a tribute to Bollywood icon, we are pleased to announce that we will be launching her wax figure in early September this year! Her figure is one of its kind in the world, and it’s an exclusive addition to Madame Tussauds Singapore”.

Boney reacted that he was touched by the efforts of Madame Tussauds.