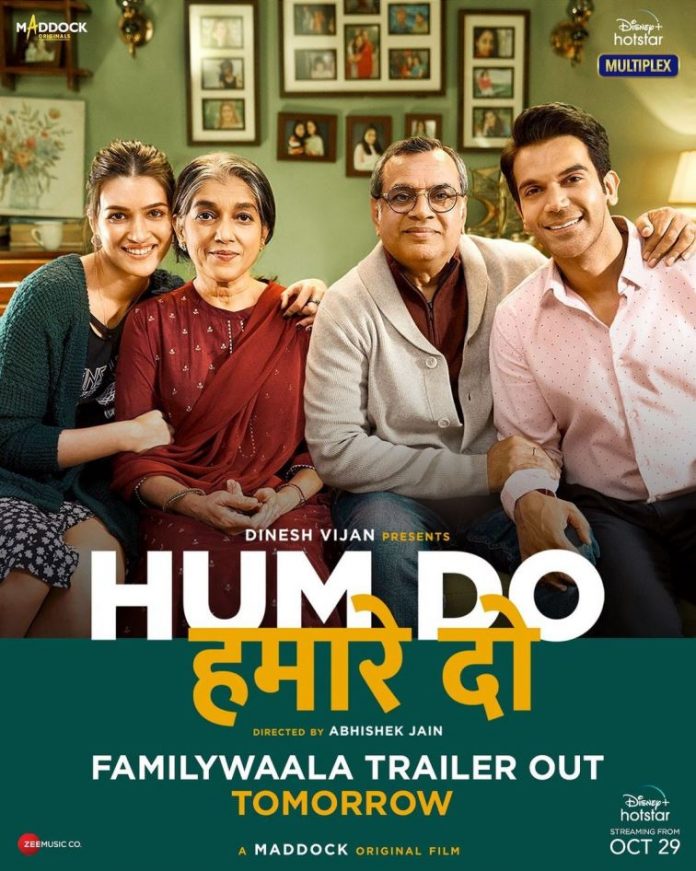 Makers of the upcoming film Hum Do Hamare Do have released the official trailer on October 11, 2021. The film has Kriti Sanon and Rajkummar Rao playing the lead roles and also features Paresh Rawal and Ratna Pathak Shah.

The trailer has shown the lead actor Rajkummar Rao making every effort to win the love of his life played by Kriti Sanon. Rajkummar’s character is on a quest to arrange for a set of parents to impress his lady love and the story then takes a hilarious turn to make the perfect entertainer.

Apart from the presence of Rajkummar and Kriti, having Paresh Rawal and Ratna Pathak Shah has made it more interesting for the audience. The film is directed by Abhishek Jain and produced by Dinesh Vijan. The makers had started to film in October 2020 in Chandigarh.

Rajkummar was last seen in the film Roohi while Kriti was last seen in the film Mimi. Roohi also starred Janhvi Kapoor and Varun Sharma while Mimi also starred Pankaj Tripathi and made the perfect entertainer for the audience on the OTT platform. Hum Do Hamare Do is all set to be released on the OTT platform Disney+Hotstar on October 29, 2021. This makes the film right in time for the Diwali season.