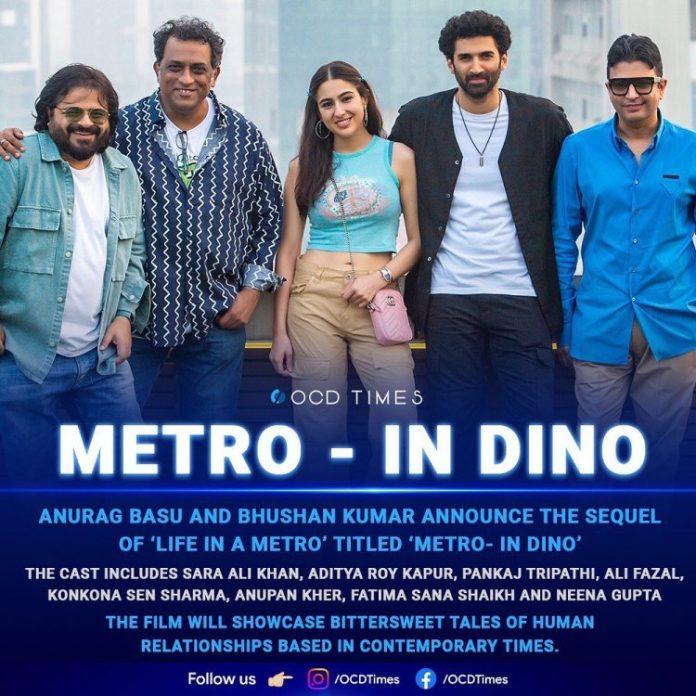 Indian actress Sara Ali Khan is one of the most talented actresses in Bollywood who made her debut with the film Kedarnath in 2018. The actress is now all set to be seen opposite Aditya Roy Kapur in the upcoming film Metro In Dino. The film is a multi-starrer project which also features Anupam Kher, Pankaj Tripathi, Neena Gupta, Ali Fazal and Konkana Sen Sharma.

Metro In Dino is bank-rolled byKrishan Kumar, Bhushan Kumar, Taani Basu and Anurag Basu. The story will be based on the unpredictable human relationships in contemporary times. The makers have come up with a fresh story line and the audience will also get to witness a fresh pairing of Sara with Aditya.

Bhushan Kumar expressed his excitement of working with Anurag Basu again. The producer added that none other than Anurag could do justice to a subject like this. He also revealed that Pritam would be composing the music for the film.

Anurag while talking about the project said that the subject is relevant and fresh and that he is looking forward to collaborate with the amazing artists. Sara also announced about the film through her social media account by sharing pictures.