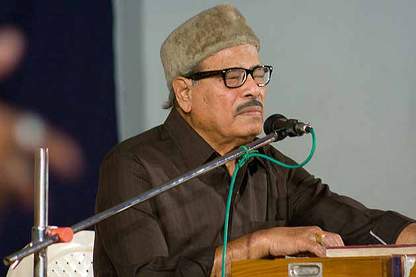 BollywoodGaram.com: Legendary Indian singer Manna Dey on October 24, 2013 died in a hospital in Bangalore. The 94-year-old Dey was being treated for a respiratory problem and renal failure in the last five months. The singer on October 23, 2013 was taken to the ICU and has been in and out of the hospital in the past few months.

Reports say that the Padma Shri award winner died of cardiac arrest at 3:50 am in the hospital. At the time of his death, the ‘Sur na saje kya gaun main’ singer was with his daughter Suroma, while his wife Sulochana passed away in 2012 due to cancer. In the last few years, Dey was staying with his daughter and other relatives in Bangalore.

The singer has another daughter who lives in the US. The body of the ‘Puchho na kaise maine rain bitayee’ singer will be kept at Ravindra Kalakshetra in the city from 10 am to 12 pm (noon), for the public to show their last respects. The cremation is expected to take place in the evening at Hebbal cemetery. The family of the veteran singer said that his relatives have already arrived to the city after he was hospitalized.

The singer was born as Prabodh Chandra Dey and was fondly known as Mannada. Dey has sung thousands of songs in Hindi, Bengali, Kannada, Malayalam and Gujarati.