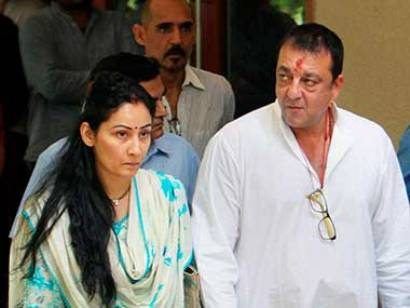 BollywoodGaram.com: After spending a month with his family, Bollywood actor Sanjay Dutt’s leave has come to an end and he returned to the Yerawada Jail in Pune on October 30, 2013 in order to serve the remainder of his sentence. The ‘Munna Bhai’ actor was spotted with his wife Maanyata, who walked with him to the jail gates.

The ‘Vaastav’ actor left his residence in Mumbai in the morning and thanked the media because they respected his privacy during the time he was on leave. While talking to reporters, Dutt said, “I still have a problem in my legs but it is a bit better than before. Pray for me so that I can come out soon. Happy Diwali to all.”

The 53-year-old star was granted two weeks of leave from jail on medical grounds and was later granted another two weeks of leave. Dutt will be serving the remaining 42 months of his sentence in the case of illegal possession of arms in the 1993 Bombay blasts.

Earlier in 2013, the Bollywood star was sentenced to five years in jail, out of which he already served 18 months. In recent times, there were rumors that the Home Minister R R Patil received recommendations to reduce the jail term of the actor, but the minister confirmed that he has not received any such requests so far.