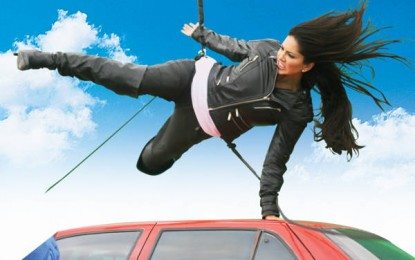 BollywoodGaram.com: Indo-Canadian actress Sunny Leone was injured recently, while she was shooting an action sequence for her upcoming movie ‘Tina and Lolo’. The upcoming flick is an action comedy and also features actress Karishma Tanna.

In the sequence, Karishma and Sunny participate in some extreme stunts and one such stunt went wrong. In the end, the former ‘Bigg Boss’ contestant escaped with bruises on her ribs. In order to heal, the doctor advised Leone to rest and refrain from shooting for a few days, but she is reportedly continuing to shoot on the sets in Mumbai.

Devang Dholakia, the movie’s director confirmed the news and said, “It was unfortunate that Sunny got hurt as utmost care is taken with both the girl’s safety while they are doing action scenes.” The director went on to say that thankfully, the actress was not injured badly and he admired her professionalism.

Dholakia also stated that both girls insist on doing their own stunts in the movie, due to which they take extra precautions. The sequence required both girls to jump over a car into a bunch of villains, who are shooting at them. Sunny managed to take her man down, but landed awkwardly on her ribs in full force.