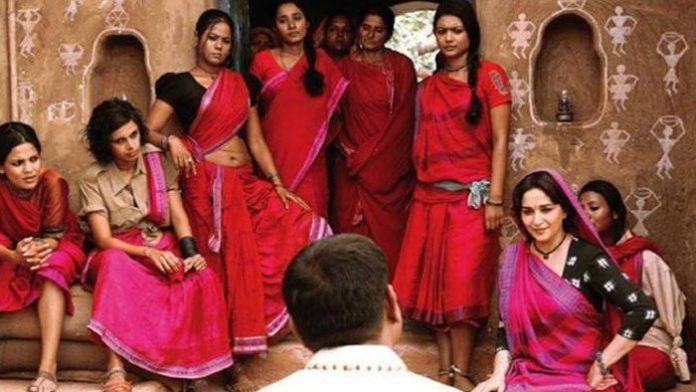 BollywoodGaram.com: The makers of the Bollywood movie ‘Gulab Gang’ have unveiled the first trailer video of the Madhuri Dixit and Juhi Chawla starrer movie. The director Soumik Sen’s new movie is expected to wow the audience and the trailer video – which has just been released – is further proof that Madhuri will not disappoint with her role.

The story of ‘Gulab Gang’ is based on the life of Sampat Pal, who is an activist from Bundelkhand in the state of Uttar Pradesh and fights against different social evils, including child marriage, dowry and domestic violence. As time passes by, many women decide to join her and she has a force of more than 10,000 women, who are known as the ‘Gulabi Gang’.

Sampat’s name and her actions became known with the help of an NGO and a documentary was filmed about her later on. Pal also participated on the popular reality show ‘Bigg Boss’. Juhi will be seen playing the role of a politician. The actress and her different moods in the flick will mesmerize the audience. The movie will be an exploration of feminism and will show women as ambitious, strong, but also vulnerable.

The movie is produced by Anubhav Sinha, who is known for directing ‘Tum Bin’ and action thriller ‘Ra.One’. The shooting of the movie began in October 2012 and is all set to hit the theatres on March 7, 2014.