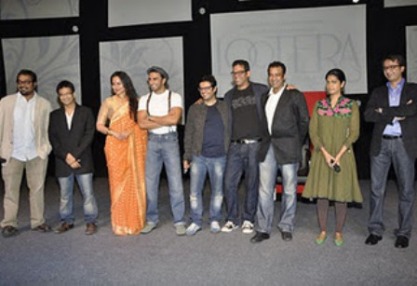 After Bollywood star Salman Khan got lucky with the ‘Eid’ release, the makers of the movie ‘Lootera’ are also releasing the movie on ‘Bakri Eid’. The movie has Sonakshi Sinha and Ranveer Singh in the main role and will be released on October 26, 2012.

The trends was started by Salman, who released his movies ‘Wanted’, ‘Dabangg’ and ‘Bodyguard’ on the festive day. The day proved fruitful for all the movies and has been tagged as successful.

Moreover, the upcoming movie of Salman ‘Ek Tha Tiger’ opposite Katrina Kaif will also be released in the day of ‘Eid’. Since the day has already booked by Khan for his film, the makers of ‘Lootera’ thus play a safe game and opted to release the movie on ‘Eid-Ul Zuha’.

Salman has been lucky with the ‘Eid’ releases of his movies as it every time helped the movie to take the advantage of the festival. Reports said that Sonakshi had personally requested for an ‘Eid’ release of the movie as it is auspicious for her. Surprisingly, her debut movie ‘Dabangg’ too was released on ‘Eid’. Vikramaditya Motwane of Udaan fame has directed the movie and has been produced by Vikas Bahl. The makers hope that the day will also prove auspicious for the movie also.