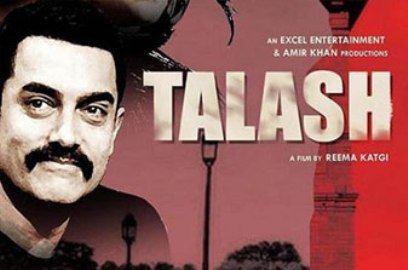 The first trailer of the much awaited movie ‘Talaash’ has been released. After ‘Sarfarosh’ actor Aamir Khan will be seen in the role of a cop. Khan was appreciated for his role in the movie ‘Sarfarosh’ in which he played the role of a young police officer after his father dies due to the negligence of the police.

In ‘Talaash’ the actor is back in his intense role in which he is in search of some clues to bust a criminal. The trailer also shows Kareena Kapoor in the role of a prostitute which is again the second time for the actress after ‘Chameli’.

The first trailer also shows Rani Mukherjee looking worried and depressed. Aamir is thus up to a quest to catch a criminal with the help of prostitutes and diving underwater.

The thriller movie is directed by Reema Kagti and is produced by Aamir Khan, Farhan Akhtar and Ritesh Sidhwani. The movie will hit the theatres on June 1, 2012. Some of the shots of the movie are taken in Pondicherry and in Mumbai. Earlier the makers thought of shooting in the red light area after which they thought that it wouldn’t be safe. The scene was later shot at the Leopold Cafe on Colaba Causeway.