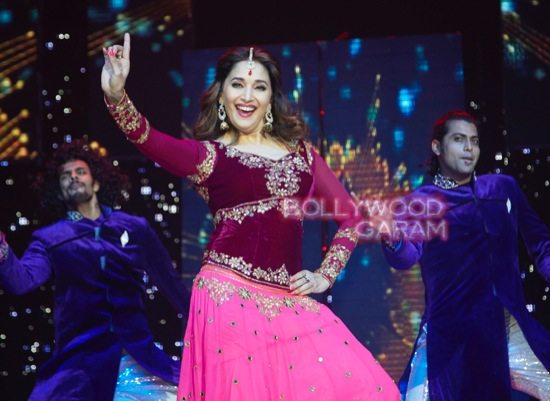 The electrifying team of the upcoming movie ‘Happy New Year’ including Shahrukh Khan, Deepika Padukone, Abhishek Bachchan, Farah Khan, Vivaan Shah and Sonu Sood concluded the SLAM Tour in London at the O2 Arena. Bollywood actress Madhuri Dixit was a surprise package as she entertained the audience with her splendid performance on a medley of her songs.

Madhuri performed on the foot-tapping song ‘Ghagra’ and dazzled on the stage in a variety of costumes. The audience had a great time as they shouted out SRK right till the end. The ‘Om Shanti Om’ actor performed with co-star Deepika Padukone on a duet.

The ‘Finding Fanny’ actress appeared in a white outfit and was applauded by the audience for her performance. Abhishek too managed to drive the audience crazy with his moves in a glittering gold jacket and denims. Filmmaker Farah Khan and actor Boman Irani also took the stage and entertained the audience with their hilarious dance moves.

The SLAM Tour started off in the US in Houston, San Jose, Washington DC, Chicago, Vancouver and New Jersey and all the shows were successful and went houseful.