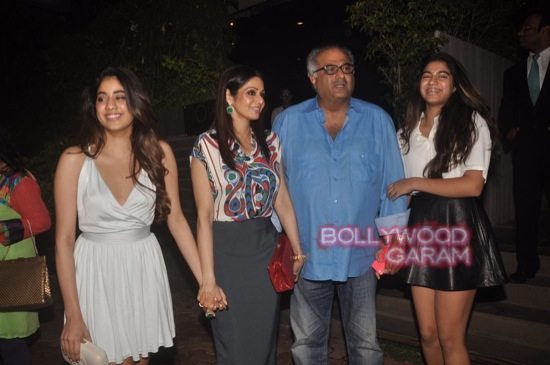 Indian veteran diva Sridevi was seen along with husband Boney Kapoor and daughters Jahnavi Kapoor and Khushi Kapoor, having a fun time at Juhu in Mumbai on October 13, 2014. The actress and her daughters looked trendy and chic, while on their family trip together.

The ‘Mr. India’ actress was seen wearing a printed Hermes Spring 2014 top with a grey pencil skirt. The actress recently celebrated karvachauth with her near and dear ones and said that she has been following the custom of karvachauth every year. She also added that she dresses like a bride every year on karvachauth.

Sridevi’s daughter Jahnavi will soon make her debut in Bollywood.