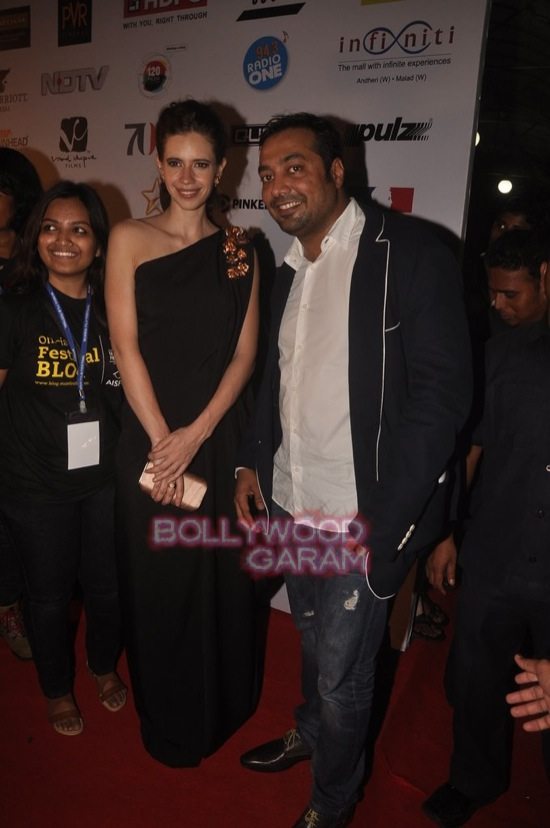 MAMI’s Mumbai Film Festival 2014 opened to a night of sparkling stars and celebs.

Celebrities from Bollywood flocked to Chandan Cinema to attend the 16th Mumbai Film Festival which was organized by the Mumbai Academy of Moving Image (MAMI) in Mumbai on October 14, 2014. The 8-day event kicked off with the premiere of the internationally acclaimed movie ‘Serena’ – starring Jennifer Lawrence and Bradley Cooper in the lead roles – directed by Susanne Bier.

Aishwarya Rai Bachchan declared the MAMI-organized film festival open as the guest of honor and expressed that it was a privilege for her to be present at the 16-year-old entity. The ‘Guru’ actress said, “Kudos to the team and everybody who has made this happen. I knew what was going on and what it took to keep the flag going.” Aishwarya looked gorgeous at the event in a red and blue Sabyasachi sari, with a red full-sleeved blouse.

Kalki Koechlin was a confident presence as the Master of Ceremony at the event, wearing a black one-shoulder gown with golden florals and ethereal high heels. Complementing her look was her graceful hair updo.

Bollywood veteran and cabaret queen Helen, and French actress Catherine Deneuve were conferred the Lifetime Achievement Awards at the opening ceremony. Helen looked elegant as ever in a black sari with a gold border.

Deepika  looked excited and in high spirits at the event. The actress was seen taking selfies with the crows with her phone. Akshay walked in wearing a crisp grey suit with a hint of shimmer. He spoke on the treatment of the elderly in India and showed a touching 60-second Helpage India clip on the subject.

There was a considerable presence of international actors as well, with Deneuve and Chinese actress Bai Ling, who floored the paparazzi with her easy going attitude and red see-through, plunging back lace gown.

The event will continue till October 21, 2014. The Mumbai Film Festival faced several hurdles this year due to lack of sponsors, but managed to continue its 16th chapter with the immense support from the Indian film industry.

Exclusive video of Bollywood celebrities on the red carpet of the MAMI Mumbai Film Festival 2014 in Mumbai: