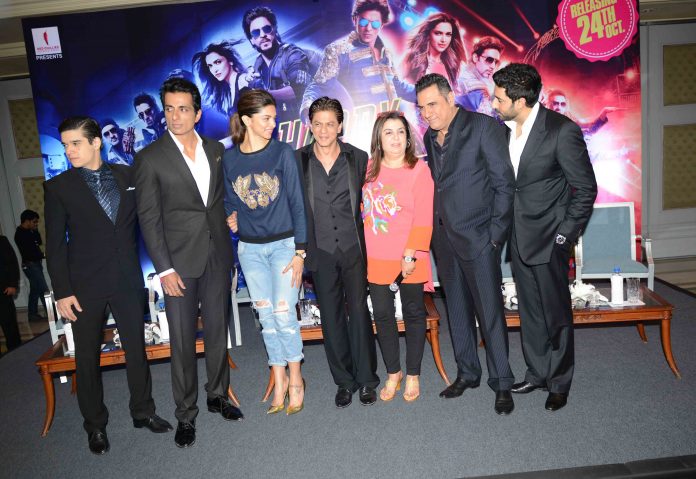 The party shifts to the capital as the Happy New Year cast promote in Delhi.

The entire team of Happy New Year arrived in the capital on October 20, 2014 to promote their movie. Shahrukh Khan, Deepika Padukone, Boman Irani, Abhishek Bachchan, Farah Khan, Sonu Sood and Vivaan Shah were all present at the event held in Delhi.

The team of HNY is making sure that they promote their movie on every possible platform and TV show. At the promotional event, Shahrukh Khan said, “So far male directors in the industry have always presented the more woman side of me. They have brought out the romantic Shahrukh. But Farah is only director in Bollywood who brings out the manly side of me but in a loving way. I enjoyed being a man with Farah.”

As it happens at every HNY promotion, the team joked around and made the audience present have a great time. Vivaan Shah, known for his funny dance moves, cracked up the audience as he took center stage. Shahrukh Khan and Deepika Padukone showed off some romantic moves on the stage. Deepika was wearing a Hemant and Nandita creation from the Autumn Winter Collection of 2014.

The men in the team wore black suits, while director Farah was seen in an orange kurta with black pants. The HNY team has stepped up promotions as the movie is all set to hit the theatres on October 24, 2014. The movie is produced by Gauri Khan and is directed by Farah.