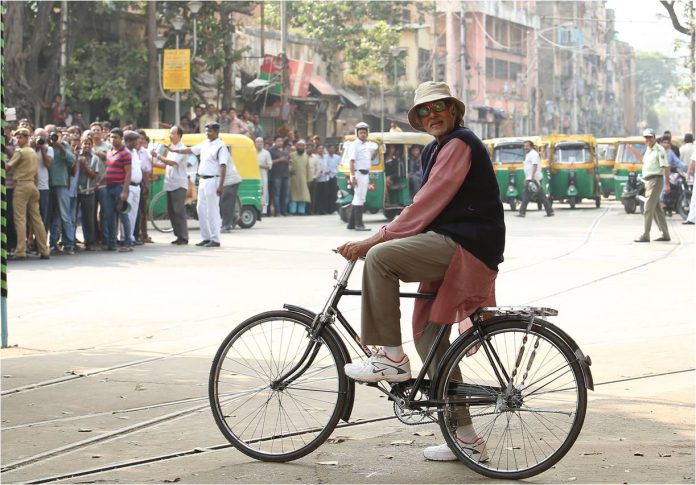 Kolkata hosts Amitabh Bachchan while he shoots for ‘Piku’.

Bollywood superstar Amitabh Bachchan was seen having a great time while shooting for his upcoming movie ‘Piku’ on the streets of Kolkata on November 2, 2014.  He seemed thrilled and excited as he paddled on a bicycle and continued to  roam around even after the shot.

The set of the movie was placed in front of thousands of people who gathered to watch Big B shoot for ‘Piku’. One of the crew members had confirmed that they shot near the Nonapukur tram depot and that the Chief Minister of West Bengal Mamata Banerjee assured complete cooperation.

About 100 cops were deployed to ensure that there were no security issues, despite the huge crowd. Amitabh reportedly has a soft corner for the city of Kolkata as he got his first job here and his life partner Jaya Bachchan is a native of the city. Moreover the actor was shooting in the city after a gap of about eight years.

‘Piku’ is a story about a relationship between and father and a daughter, which will be played on screen by Amitabh and Deepika Padukone. The movie is produced by MSM Motion Pictures and is scheduled to hit the theatres on April 30, 2014.