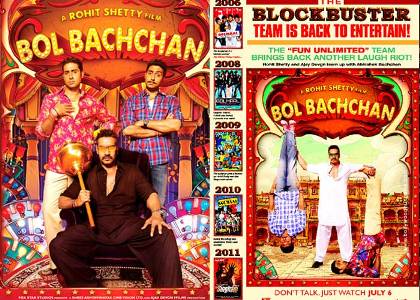 The makers of the much awaited movie ‘Bol Bachchan’ have released the first posters of the flick. The movie has Abhishek Bachchan and Ajay Devgn and the posters were unveiled by Jr Bachchan on Twitter.

Ahishek Tweeted, “Contrary to the title, I won’t say anything. Don’t talk, just watch!” The movie is all set to be released on July 6 as per the poster and will have Abhishek Bachchan playing two different roles, Ram Prasad Sharma and Laxman Prasad Sharma.

The movie will also bring back the ht pair of Ajay and Rohit Shetty, who have earlier created magic in the movies like ‘Golmaal’, ‘Golmaal Returns’, ‘Golmaal 3’, ‘All The Best: Fun Begins’ and ‘Singham’. The poster of the movie features Ajay in a black pathani while he hold a ‘gada’.

Abhishek in his two roles is seen standing behind, one of the roles looks like that of a very macho man, while the other looks like that of a very metro sexual look, very similar to the role he played in the movie ‘Dostana’. The movie also has Prachi Desai and Asin as the female leads. The movie is presented by Fox Star Studios and co-produced by Ajay Devgn Films and Shree Ashtavinayak LFS Infra Ltd.