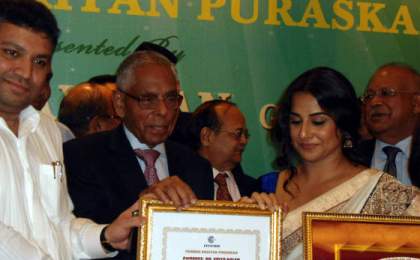 Bollywood actress Vidya Balan , who has in recent days won several accolades, was awarded the Prabha Khaitan Puraskar 2012 from the Calcutta Chamber of Commerce. The award was presented by West Bengal Governor MK Narayanan.

Narayanan, while conferring the award to Vidya said, “ I am doubly privileged to present this award to Vidya Balan as i come from the same town of Kerala where she was born.” The actress on receiving the award said that she felt extremely overwhelmed to receive the Prabha Khaitan Puraskar especially after knowing a few names who has earlier received this award for excelling in their own field.

Vidya added that she thinks that women are taking the centre stage in various walks of life all over the country and cinema is just a reflection of that. The actress appeared in a ravishing off white sari, with rich blue gold brocade border and a three quarter velvet blouse. The ‘Dirty Picture’ actress completed her look with a pair of Jhumkas.

Balan even expressed her wish to work in Bengali films as well. The actress said that Satyajit Ray is her favourite Bengali director but till now she has not received any offers.