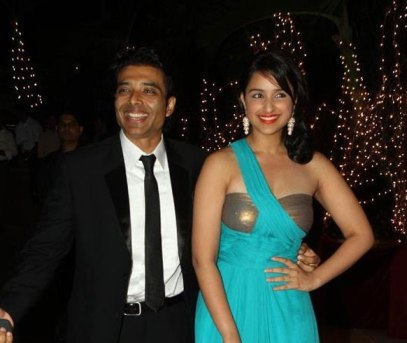 Bollywood actors, Parineeti Chopra and Uday Chopra are the latest ones to pair up in the industry. After constantly being spotted together, there are speculations that the two might be dating each other.

Reports say that Parineeti considers Uday as her mentor and the two have been on a dinner date recently. The actress and the ‘Dhoom’ star have been spotted at a Michelin star restaurant Bandra, where they were seen enjoying each other’s company.

After doing films like ‘Ladies Vsw Rick Bahl’ and ‘Ishaqzade’, the Chopra lady has become the favourite of Yash Raj Films due to which Uday and Parineeti are dating each other. Moreover, the two even arrived together at the success party of ‘Ishaqzaade’ and film maker Karan Johar’s much talked about birthday bash.

Some of the close friends of the couple even said that the two have a lot in common and are the best of friends. It was also revealed that they love to hang out with each other. So there are a few indications that the industry might get another cute couple if everything works out well. Hope sister Priyanka Chopra does not have a problems with this union, as she has also been associated with YRF many times.