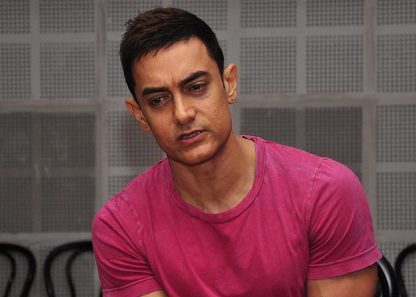 Bollywood actor Aamir Khan’s look in the movie ‘Dhoom 3’ has finally been revealed. Surprisingly, there are no fancy hair dos and no bulging biceps but a simple look which has been kept very basic.

The actor has already started shooting for the movie and says that he has kept his look simple for his anti-hero role in the hard core action flick. Earlier it was reported that he wasn’t happy about his hair style for which he had delayed the shoot.

But now it seems like he is satisfied with the look and is all set to face the cameras. Aamir for the movie is sporting a short cropped hair look and talked about the shoot during a press conference on July 11, 2012 at the Yash Raj Studios.

Apart from his casual looks, the actor was also dressed at his casual best in a grey track pant, pink t-shirt and Kolhapuri chappals. Khan was also seen wearing studs in his ears. The movie also stars Katrina Kaif, while Abhishek Bachchan and Uday Chopra have been retained from the earlier instalments of the movie. The movie has been written by Vijay Krishna Acharya and is produced by Aditya Chopra. The movie is expected to be released next year.