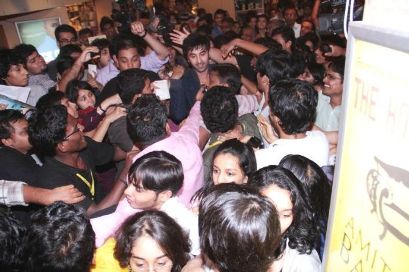 The ‘Rockstar’ actor Ranbir Kapoor was on his way to a book launch when several female fans of the actor mobbed the actor to catch a glimpse. Even before the car of the star could reach the venue, the vehicle was mobbed by several female fans and the driver had a hard time parking Kapoor’s car.

The car of the star was banged by the fans who were all trying to take a picture with him. Even after the actor got inside the venue Ranbir, the actor did not have any space to even stand. The screaming of the fans continued till the event concluded and it took about an hour to take back Ranbir to his car.