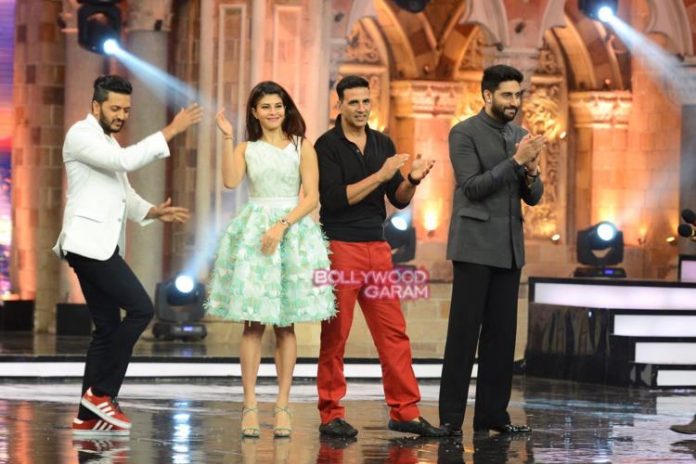 After the disappointing two installments of the franchise, the director duo have indeed worked hard to make sure that the audience has a good time watching the multi-starrer flick. The makers of the movie have tried their best not just in terms of a storyline but have also well executed and made the best use of the stars in the flick.
The story is about a rich Indian businessman Batook Patel in London, who has three daughters Ganga Jamuna and Saraswati also known as Gracy, Jenny and Sarah, who try their best to convince their father that their respective boyfriends Akshay Kumar, Riteish Deshmukh and Abhishek Bachchan are worthy to be their husbands. However, Patel has a secret that he has hidden from his daughters.
The introduction part has been dragged a bit but the moment Akshay enters, the laughter riot does not stop. Akshay’s character in the movie has a split personality disorder and his disability leaves the audience in splits. Abhishek can be seen rapping and has done justice to his part of comedy in the movie. Riteish, who plays the role of a racer manages to keep the audience engaged.
The ladies in the movie are pure eye candy, with Jacqueline deserving a thumbs up for her foot tapping sequence in the song ‘Tang Uthake’. Overall Akshay steals the show with his amazing sense of humour. ‘Housefull 3’ has managed to remove the tag of ‘cheap comedy’ from the franchise.
Photo Credits: Viral Bhayani