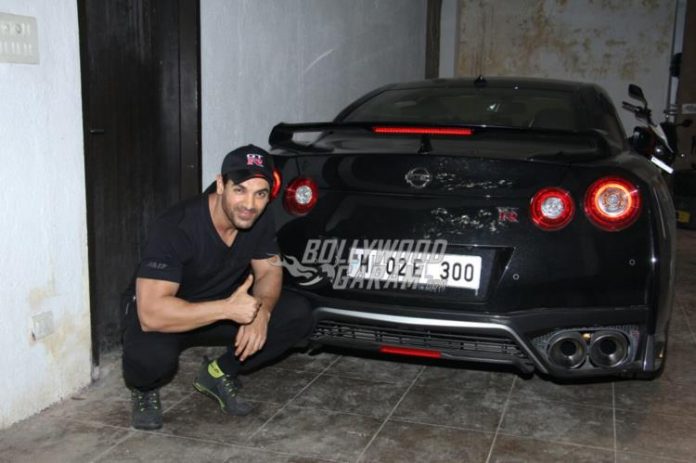 There is a New Nissan GTR Ready to Race in Town

Actor/ Model John Abraham is known for his love for powerful machines- be it bikes or cars. The ‘Force 2’ star’s latest toy is his new black Nissan GTR. He proudly posed away for the shutterbugs and interacted with the media as he told the world about his latest acquisition!

John Abraham was recently seen in the hit movie Force 2 in a lead role opposite Sonkashi Sinha and is currently working on upcoming projects like Mumbai Saga and will also star in the famed Hera Pheri series – Hera Pheri 3.

While his film Mumbai Saga is currently on hold due to unknown reasons and the actor has quoted on several occasions that he has no idea about what’s going on with Director Sanjay Gupta’s Mumbai Saga. Hera Pheri 3 is scheduled for release in mid 2017 and stars Paresh Rawal, Suniel Shetty, Akshay Kumar and Abhishek Bachchan alongside John Abraham.

As a producer, John Abraham is busy with the production of his upcoming movie Satra Ko Shaadi Hai, which was initially scheduled to hit the theaters in 2015, but got delayed due to various reasons. The film is currently expected to release within the next few months.

But that’s enough talk about John’s upcoming projects and let’s get back to this adorable picture of John with his Nissan GTR and adopted dog Bailey.

Little pup Bailey has definitely grown into a beautiful girl we must say! John is a staunch animal lover is all for adoption of stay dogs. He recently adopted Bailey in September 2016 and the two have been inseparable since then.