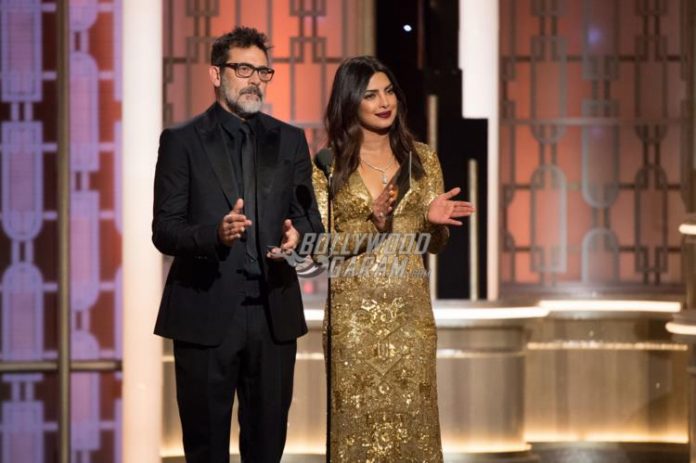 The successful actress, who is currently shooting for the American TV series Quantico and her upcoming movie Baywatch, looked drop dead gorgeous in a body fitting golden gown by Ralph Lauren.

The talented actress and singer accessorized her golden dress with a stunning neck piece. She never disappoints us on the Red Carpet and definitely knows how to steal the show. We expected her to outshine the rest on the 74th Golden Globe Red Carpet with her gold dipped embroidered dress and 90s inspired brown lip color with a hint of cranberry.

As for her hair, Priyanka opted for loose boho-chic waves and a center part which complimented the plunging neck-line rather well!

On the work front, the actress was last seen in her Bollywood movie Jai Gangaajal and is currently looking forward to her first Hollywood movie release Baywatch. She has also been busy promoting upcoming Punjabi movie Sarvann that has been co-produced by her production house, Purple Pebble Pictures.

Priyanka had the honor of presenting an award to Billy Bon Thornton for his outstanding performance in the Netflix series, Goliath along with hollywood star Jeffery Morgan.

We hope you enjoyed the gallery. Stay tuned for Garam updates on Priyanka Chopra exclusively on Bollywood Garam!