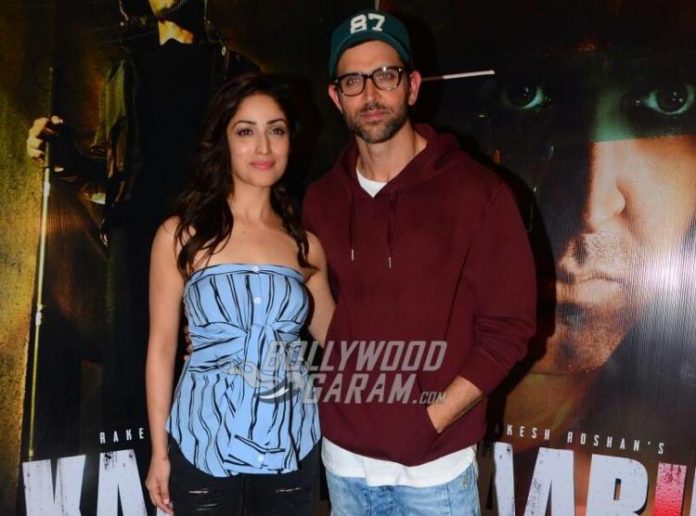 Actors Yami Gautam and Hrithik Roshan promoted their upcoming movie ‘Kaabil’ at Mehboob Studios in Mumbai on January 17, 2017. Yami looked great in an off shoulder top and pair of ripped jeans.

Hrithik carried a cool look in a red pullover and a pair of jeans. The ‘Bang Bang’ actor completed his look with a cap, black frames and custom printed sneakers.

Hrithik and Yami will be seen playing the role of a blind couple. The movie is directed by Sanjay Gupta and produced by Rakesh Roshan and is all set to hit the theatres on January 25, 2017.

Superstar Hritik paired his laid back attire with custom painted Vans shoes. The painting is of Batman‘s The Joker. On his right shoe, he has the image of The Joker with batwings. On the left shoe, he has the four aces of the playing card deck, complete with The Joker’s signature laugh.

His co-star for Kaabil, Yami Gautam, wears an off-shoulder sky blue top. It actually looks like an office shirt that has been tied up to appear like a woman’s top. Quite creative!

The two were together for their first film together. The movie, which will release by the end of this month, is a serious topic that is being played out for audiences. The twosome play a blind couple and this doesn’t look to be your regular masala film at all. Critics who have seen the film are already praising the storyline and the two main characters who delved deep into their roles. After all, it’s not easy being blind on-screen.