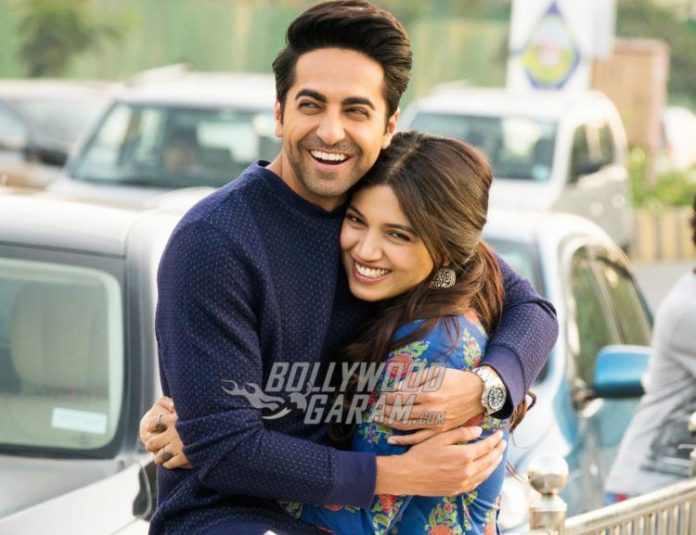 Get ready to laugh out loud with the comedy couple

Actors Ayushmann Khurrana and Bhumi Pednekar made the audience laugh with their movie ‘Dum Lagake Haisha’ that hit the theatres on February 27, 2015. The unique on-screen couple is all set to return to the big screen with the upcoming movie ‘Shubh Mangal Saavdhan’. The romantic comedy flick will be directed by R.S Prasanna and will be produced under the banners Eros International and Color Yellow Productions.

Ayushmann and Bhumi were earlier signed for the project ‘Manmarziyan’. The movie went on floors but due to certain issues the movie had to be shelved. The makers of the movie revealed the first look of the movie which features Ayushmann and Bhumi all smiles like a couple.
The chemistry of the actors has earlier managed to win the hearts of the audience and the new project looks interesting.

To get comedy straight in a movie is quite difficult, but these two have pulled it off with élan. Their comedic timing and on-screen chemistry has already proven to be a hit with their previous movie, Dum Lagake Haisha, and this one, too, looks like it’s going to be another hit in the making. Hopefully, their humour and chemistry will have audiences captivated. Ayushmann has already established himself as a great actor, being able to emote a number of emotions on screen. Though Bhumi hasn’t acted in a lot of films, she is proving to be great at what she does! Not a lot of Bollywood actors can pull off comedic roles, but these two are able to do it pretty easily. Just look at them – they look great together! The storyline to the movie is not yet out, but we will keep you posted as soon as we get the info!