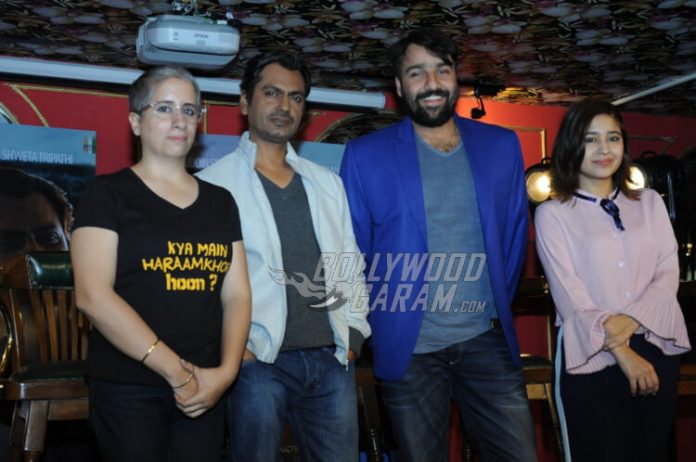 Cast of Haraamkhor parties at the movie’s success bash today!

Lead actors of Haraamkhor, Nawazuddin Siddiqui and Shweta Tripathi along with Producer Guneet Monga and Music Composer Jasleen Royal were snapped at the movie’s success bash today, as they happily posed away for the cameras.

The Movie is directed by Shlok Sharma and produced by Guneet Monga, Anurag Kashyap, Feroze Alameer, Achin Jain. The First look of Haramkhor was released on March 8, 2015.

Actor Nawazuddin Siddiqui even received the Best Actor award for his performance in the film, at the New York Indian Film Festival in 2015. The film was shot in just 16 days!

In April 2015, a FIR was registered against director Shlok Sharma on a complaint by Balbharati, Maharashtra’s textbook bureau, objecting to striking similarities between its logo and promotion scenes from Haraamkhor.

The cute Shweta Tripathi has given a splendid Performance in the movie. The Actress was last seen on screens in the movie Masaan which was released in 2015. Shweta is best known for playing the role of Zenia Khan in the Disney Channel Original Series Kya Mast Hai Life.

Stay tuned for more updates on your favorite celebrities and movies only on Bollywood Garam.