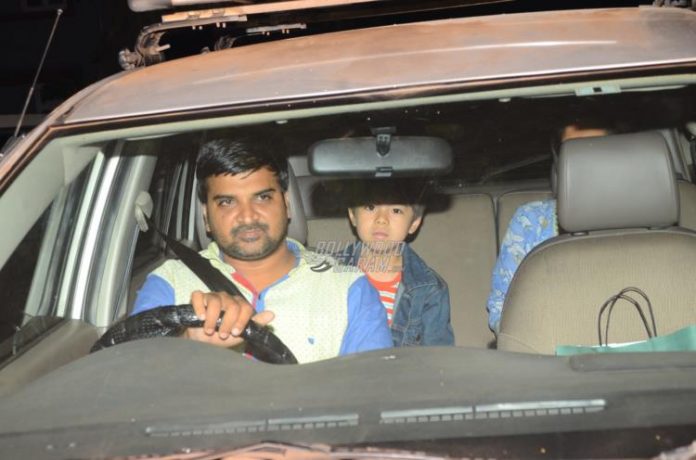 Bollywood star Salman Khan threw a bash for his new co-star Matin Rey Tangu in Mumbai on January 23, 2017. Rey Tangu is the latest addition to the cast of the film ‘Tubelight’. The bash saw attendance of various celebrities including Saif Ali Khan, Lulia Vantur, Anant Ambani and others.

Salman was seen welcoming the guests personally outside Galaxy apartments. After the super success of ‘Sultan’, the ‘Dabangg’ star is shooting for the upcoming movie ‘Tubelight’. The movie is an upcoming historical war drama movie written and directed by Kabir Khan.

‘Tubelight’ is produced by Salman and Kabir Khan and is based on the 1962 Sino-Indian war. Salman will be seen playing the role of a Man from India and falls in love with a girl from China. Composer Pritam has composed music for the flick. The movie also stars Sohail Khan, Zhu Zhu, Paras Arora, Shatrughan Sinha, Tushar Tyagi and Om Puri. ‘Tubelight’ also has a cameo appearance of Shahrukh Khan as Gogo Pasha.

Salman outside his residence was seen hugging his little co-star while rumoured girlfriend Lulia was seen smiling at them. The actor’s ‘Tubelight’ is scheduled to hit the theatres on June 26, 2017.

Salman Khan, who has been a Bollywood superstar for decades now, has many reasons to celebrate. Most recently, all charges against him were dropped for the infamous black buck shooting case. He had earlier been charged for killing an endangered species, but the reason for his being let off was because it was determined at the time that he was charged under the incorrect laws, so his case was invalid in a court of law.