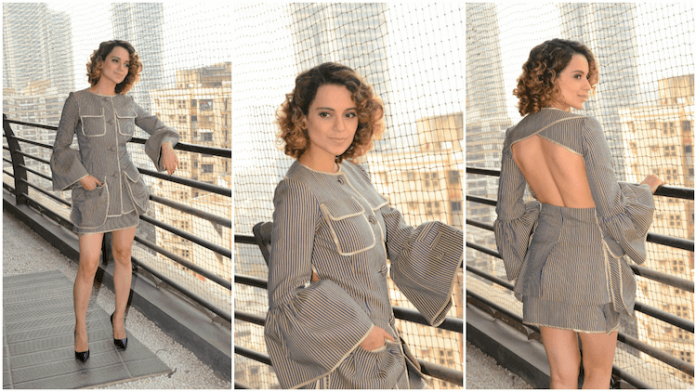 Kangana Ranaut was snapped at an undisclosed venue today as she posed for the cameras flaunting her beautiful backless stripped dress.

The talented actress was last seen in the movie Katti Batti (2015) and will be will be seen on the screen after 2 long years with her latest film Rangoon!

Her last venture was directed by Nikhil Advani and produced by Siddhart Roy Kapur under the banner of UTV Motion Pictures. The actress shared screen space with Imran Khan in the lead role.

Rangoon is an upcoming drama film, directed by Vishal Bharadwaj and produced by Sajid Nadiadwala and Viacom 18 Motion Pictures. It stars Kangana Ranaut, Shahid kapoor and Saif Ali Khan in lead roles. The film is scheduled for release on 24 February 2017.

The project is a period film set during World War II (1939-1945) and portrays the life and times of Mary Ann Evans aka Fearless Nadia, Bollywood’s first original stunt-woman, who is still widely remembered for her fiery role in the movie Hunterwali. It is believed that Kangana’s role is inspired by the real life story of Fearless Nadia. But no official confirmation has been made by the producers of Rangoon or the actress herself.

The Tanu Weds Manu actress was last seen at the book launch of a close friend childhood of her’s. She wore a beautiful beautiful red and green Manipuri phanek, paired with a dupatta, which was draped like a saree.

We wish the very best for the success of Rangoon world wide and hope to see more of her this year!

Stay tuned for latest updates on Kangana Ranaut only on Bollywood Garam.