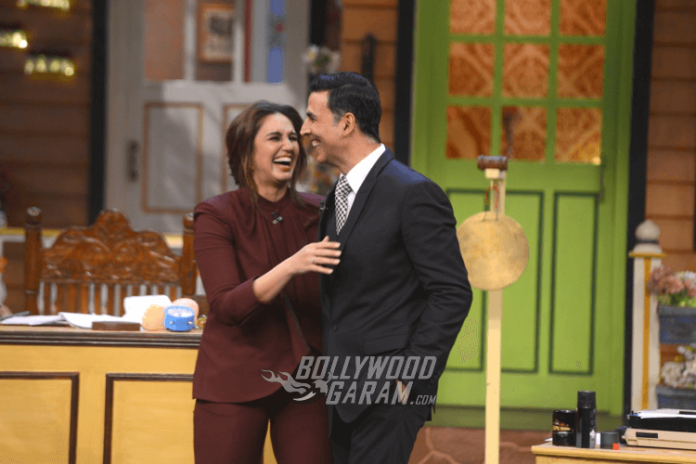 Akshay Kumar and Huma Qureshi spotted on The Kapil Sharma Show, shooting for a promo episode!

The Cast Of Jolly LLB2 (Akshay Kumar and Huma Qureshi) were snapped by the cameras as the were shooting a promotional episode of The Kapil Sharma Show Live today on January 31, 2017.

Jolly LLB 2 is a comedy drama and sequel to the Arshad Warsi and Boman Irani starrer, Jolly LLB, which released in 2013. This movie stars Akshay Kumar and Huma Qureshi in lead roles and is directed by Subhash kapoor. Saurabh Shukla will be seen in a special appearence in the sequel alongside Arshad Warsi. Annu Kapoor will be the rival Lawyer against Akshay Kumar in the movie.

Akshay Kumar enjoyed a lot with a dance on the sets of The Kapil Sharma Show with side characters of the show famously Known as Daadi, Dr. Mashoor Gulati, Rinku Devi, Santosh, Teacher Vidyavati and Chandu Chaivala.

The complete Crew of Kapil Sharma Show along with Akshay Kumar And Huma Qureshi performed a dance at the end of the show.