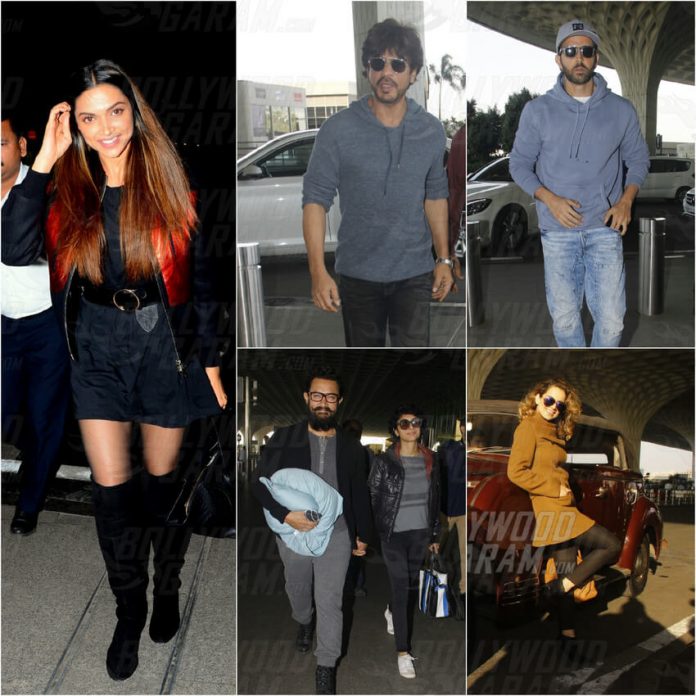 Bringing You Fresh Celebrity Fashion Straight From the Airports!

Bollywood Badshah Shah Rukh Khan was spotted at the airport on February 9. Looked like he was running late, but still managed to wave out to his fans. He kept it simple in a grey hoodie, jeans and white sneakers.

Shah Rukh Khan is on a high with his film Raees doing so well at the box office. It has already crossed the 100 crore mark and is still running successfully.

Hrithik too, was seen at the airport on February 9. He wore a light blue hoodie and jeans. He accessorized with a cool cap and shades. Hrithik has left spellbound once again with his his magic performance in his latest movie Kaabil.

The perfectionist was snapped at the airport with his lady love. The actor was seen holding his wife’s hand and walking through the airport, this is cute! Both of them looked extremely adorable in their color coordinated outfits. Black and grey was their color for the day.

The Queen of Bollywood was seen at the airport on February 5, 2017. She wore a sheer black dress and carried a furry jacket along. She departed in a vintage car, and had the perfect royal exit. Only the Queens do this, right?

Kangana waves out to her fans as she leaves the airport in her royal vintage car.

Kangana had a grand entry yet again at the airport on February 6. For change, she din’t mind getting her self clicked and gave us some stunning poses with her vintage car in the background. She had her style statement on point with a sand brown buttoned jacket and jeggings. It goes very well with her hair color, doesn’t it?

We are eagerly waiting to watch Kangana’s upcoming movie, Rangoon which releases on February 24. She stars opposite Shahid Kapoor and Saif Ali Khan in the lead and the movie is a historical drama based in a backdrop of World War 2.

This gorgeous lady has been leaving us startled every time she steps out! We caught the leading lady of Padmavati at the airport on February 7, 2017. She wore a short black dress with a pretty black jacket on it which spells- LOVE in bold red writings! Her knee length boots and black bag just add up to her perfect look.

The Khoobsurat actress actually looked Khoobsurat at her recent airport visit. We couldn’t take our eyes off Sonam. She wore a beige color dress and paired it with an over sized polka dotted T-shirt. She completed her look with black loafers, red lipstick and a black handbag.

The evergreen actress for whom age is just a number was seen at the airport on February 8. She left us spellbound with her beige silk saree. The little channel bag in her hand just fits in to the look. Rekha has given us some exceptional movies and is still noted for her versatility and acknowledged as one of the finest actresses in Indian cinema.

Sushant Singh Rajput portrays fresh talent that plays out as pure magic on screen. The young charming actor was seen at the airport in casuals.

Kriti Sanon looked very pretty in a multi-layered dress. She paired it with white sneakers and super cool glasses. We are already drooling over Kriti’s smile!

The talented cricketer was seen at the airport in a funky look. He wore a military green color hoodie and joggers. He was present at the airport minus wife Hazel.

Does she look like a mother of two beautiful daughters?

Sridevi had the perfect chic look when we spotted her at the airport on February 6. She wore a black knit poncho styled top with white ripped jeans and black boots. Her neat hair bun just finished the look perfectly.

We spotted Sridevi again on February 8 in a contrasting attire. She wore a long Indian dress with some classic traditional work and prints. She keeps it minimal when it comes to make up and accessories and that’s what we like about her. She maintained the neat tied bun hairstyle common from both he airport looks!

Parineeti wore an amazing black and white printed jacket and a black singlet inside. Her outfit was a perfect combination of style and comfort!

It’s quiet rare to spot the actress in a salwar kameez and here she was, at Mumbai Airport in a red hot traditional outfit. We love this look!

This veteran actor has given us some amazing performances and set some style statements back then. And still now manages to woo’s us with his classic fashion sense. This man has been one of the most generous people from the Bollywood Industry.

Looks like men these days get their beard goals from our Bollywood star- Suniel Shetty! Bollywood has been blessed with exceptional actors and Suniel Shetty is one of them. He was spotted at the airport wearing a high round collar t-shirt with blue jeans and black sneakers.

Veteran Actress and exceptional dancer Hema Malini was seen at the airport in Indian wear. She wore a simple yet a very elegant dress chanderi silk churidar salwar in light summery shades.

Esha Gupta kept it simple in a white sleeveless t-shirt and military green pants. The brown shoes and belt add to the classic look.

The youngest brother from the Khan brothers was spotted at the airport in extreme casuals. He wore a Being Human tee and tracks. Did he just want to go on a jog straight from the airport?

Neha Dhupia preferred to be in her comfort zone this time! She wore a loose white tunic top with blue ripped jeans and completed the attire with Adidas sneakers.

Emraan was seen at the airport on February 9, in a denim shirt and sneakers.

Zarine Khan, also known as Zareen Khan was seen at the airport in February 6 and was busy talking on the phone. She kept it simple in a red t-shirt and jeans. The pretty actress was last seen in the movie Hate Story 3. Waiting to see more of the young lady this year.

Vivek Oberoi was formally dressed at the airport on February 8. He looked good in a pink checked shirt and cream pants.

Ayushmann was snapped at the airport in a black t-shirt and blue jeans which he paired with a black jacket and a cool cap. Looks like he’s headed to a jam session.

This fine film actor was recently seen in the movie Raees with Shah Rukh Khan. Nawaz manages to create magic on screen even with small roles. That’s the best part of this versatile actor.

Versatile actor Sharman Joshi was spotted at the airport in casuals and wore a brown leather jacket over it. He looked dapper in it!

Shruti Hassan is daughter of Actor Kamal Hassan. She has been doing really well for herself in south. We spotted her at the airport on February 6 in black shoulder top and grey leggings. Way to go girl!

Arbaaz Khan was seen at the airport on February 7 2017. He looked super handsome in a the blue embossed jacket and ripped jeans. Looks like he’s really taking fashion seriously now!

Talented singer Adnan Sami likes to keep it extremely casual while traveling. He was spotted at the airport in a black collared t-shirt and jeans.

Ace Director and producer Vidhu Vinod Chopra was spotted at the airport with his wife and acclaimed film critic Anupama Chopra. He wore a light pink shirt where as his wife wore a pink scarf to maintain the color coordination between the couples. We like the smiling couple in pink.

Evergreen singer Sonu Nigam was spotted at Mumbai Airport on February 5. He choose to wear a cool beinge jacket paired with a military green cap and beige dungarees. Beige seems to the color of the season, no?