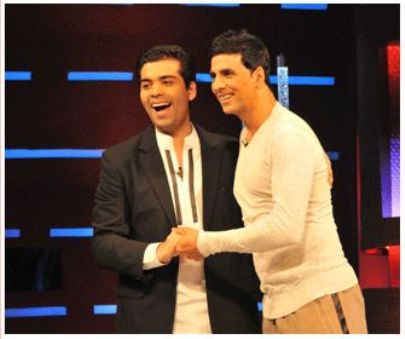 For the first time Bollywood actor Akshay Kumar and filmmaker Karan Johar will join hands to produce a movie. The movie will be directed by Punit Malhotra, who directed the movie ‘I Hate Luv Stories’.

Akshay, in the movie, will be seen playing one of the lead roles. The film is expected to go on floors in the year 2014. The filmmakers will unveil another male lead from the movie next week. When asked about the details, Karan said that he cannot reveal much about the project, but said that it was a mainstream flick and had a very strong underlying message. The ‘Kuch Kuch Hota Hai’ director also said that it was Punit who brought the script to him, after which he immediately approached Akshay for the role.

While talking about the ‘Khiladi’ actor, the filmmaker said that if Dharma Productions had to collaborate with Akshay, then it had to be the right kind of movie. Johar said that they were both very passionate producers with one great aim.

The movie will be co-produced by Karan’s mother Hiroo Johar and Akshay’s wife Twinkle Khanna. Karan has also been close friends with Twinkle from childhood. The filmmaker went on to say that the shooting of the movie will begin after Punit directs Imran Khan and Kareena Kapoor in a love story.