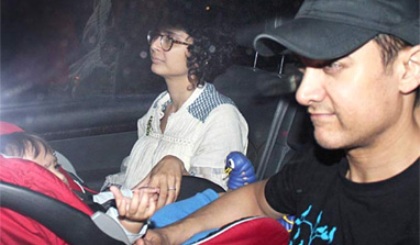 After a long wait, Bollywood star Aamir Khan has begun shooting for his upcoming movie ‘Peekay’ in Rajasthan, India. This time too, the actor has made it a point to take his wife Kiran Rao and son Azad along with him.

The perfectionist has lined up a 45-day shoot schedule in the state of Rajasthan, due to which he decided to take his family with him. Aamir reportedly cannot be away from his wife and child for too long. Earlier, when the ‘Taare Zameen Par’ actor was in the US for the shoot of ‘Dhoom 3’, he made sure that Kiran and Azad had accompanied him.

Khan had set up a complete home for around three months in Chicago, so as to be with her husband. The movie ‘Peekay’ will be directed by Rajkumar Hirani, while Junaid Khan will be co-directing it. The movie also stars Anushka Sharma.

While talking about the movie, the filmmaker said that it was satire about God and God-men. The movie will also have debutant Sushant Singh Rajput, who was known for his role of Manav in the TV series ‘Pavitra Rishta’. The shooting for the flick appeared to have been postponed, but Hirani clarified that there was no delay. The shoot was supposed to begin by January 2013 in Delhi and Rajasthan to capture the winter at the location.