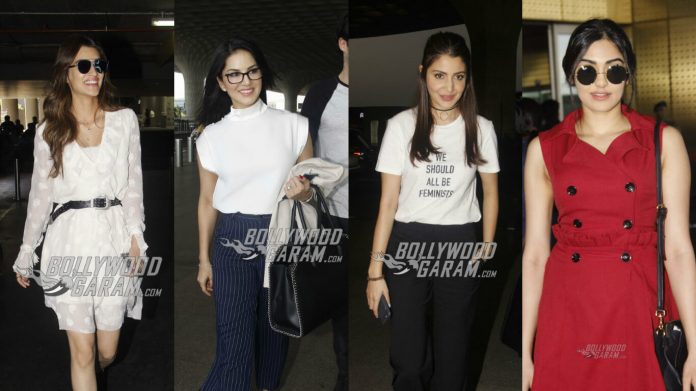 The Airport’s been buzzing with celebrities all week and have put together a compilation of all the best dressed Bollywood celebrities spotted at Mumbai Airport last week. Quite a few of the ladies were headed to Goa for attending the India Beach Fashion Week 2017 and looked stunning at the airport.

Hritik Roshan was seen wearing a white T-shirt along with a blue shirt, blue jeans and blue sneekers. Hrithik completed the casual attire with a brown Beanie and glares.

Seems like beanie’s have become a part of the actor’s latest style statement as he was spotted sporting an all black look with a beanie on the Zee Cine Awards 2017 red carpet on March 12, 2017. See red carpet photos of Hrithik Roshan here.

The Queen of Bollywood, Kangana Ranaut looked graceful in her cream colored tussar silk saree paired with brown formal shoes and a brown handbag. She has recently been in news, owing to her verbal feud with Karan Johar.

Get all the juicy details from Kangana and Karan’s on-going feud right here!

Sunny looked beautiful in a white top and blue pin stripe trousers. She was seen holding an oversized hadbag and cream colored jacket. The diva completed her look with silver ballerinas and perfected her airport fashion look with lose tresses. While husband Daniel was seen wearing a T-shirt with black jeans and black sneakers (Classic).

They were leaving for Goa as Sunny turned showstopper for Swapnil Shinde’s IBFW 2017 Collection.

That’s Sunny Leone on her way back from IBFW 2017 at Goa. She was spotted at Mumbai Aiport with husband Daniel Weber wearing a black top paired with maroon ripped corduroy pants.

Mumma Devgn wore a black top with a grey shrug, black jogger pants and blue sandals as she landed back from wrapping her shoot in Chennai for second Tamil movie VIP 2. Kajol stars opposite south actor Dhanush in a lead role in the movie.

Alia and varun were seen together in the airport, varun wore a brown V-neck T-shirt with, black boots and a brown beanie. Alia wore navy green co-ordinates with a printed shrug and sneakers.

The on-screen couple totally rocked their post release promotions of Badrinath Ki Dulhania at the Zoom Holi Bash on Monday, March 13, 2017. On the same day, they were also spotted exiting Vineet Jain’s Holi Bash, check them out.

Anushka kept it simple with a white T-shirt, black trousers and white sneakers. She was also wearing a choker.

Irrfan wore a red shirt with a green jacket, blue jeans and black shoes. He also wore a grey cap.

He was later spotted on Saturday March 12, 2017 at the Zee Cine Awards and looked dapper in an embroidered sherwani on the red carpet. Check out his red carpet look right here.

The new daddy wore a camouflage military jacket along with a black henleys, blue jeans and black shoes.

See pictures of Kriti Sanon straight from the ramp of IBFW 2017 as she turned showstopper for Sukriti and Akriti.

Kriti Sanon looked so pretty with a white one-piece dress with a black belt and black boots.

Kriti Sanon looked pretty in her red top, blue ripped boyfriend jeans and white sneakers. Kriti Sanon was coming back to Mumbai from the IBFW.

Manish Paul wore a Jacket on a T-shirt, black track pants and white sneakers. He also had a brown bag. Looks like he came straight from the Gym.

Richa Chadda wore a green crop top under blue denim overalls and black sneakers. She was holding a white bag.

Sajid nadiadwala was with his son. he was wearing black shirt and black trousers.

The rapper was seen wearing a green T-shirt with a white jacket, black Tracks and white shoes on Mumbai Airport. We caught up with him on the video shoot of Move Your Lakk as he jammed with Sonakshi Sinha and Diljit Dosanjh to it’s tunes. The song is expected to release soon, meanwhile, check out all their rocking pictures from the shoot.

You have to see Sridevi’s stunning red carpet look from the 2017 Zee Cine Awards. She looked absolutely stunning in a Manish Malhotra creation, paired with a heavy Amrapali neck piece.

Urvashi was wearing a black top with a printed shrug and black pants. She was wearing fluorescent green shoes.

Urvashi Rautela was wearing white co-ordinates with a printyed shrug.

She was also wearing orange heels.

Urvashi looked stunning in a blue one-piece and blue boots. We even spotted her having a blast at the Zoom Holi Bash this Monday. Check out her stunning photos from the event.

Daisy Shah wore a black midi dress paired with classic white sneakers and an oversized handbag. She was headed to Goa to be part of Payal Jeswani’s show at the IBFW 2017. See pictures of Daisy Shah from India Beach Fashion Week 2017 here.

The actress was last spotted at a promotional event of her film, Commando 2 held at Delhi University, one day prior to the film’s release. See the entire gallery here.