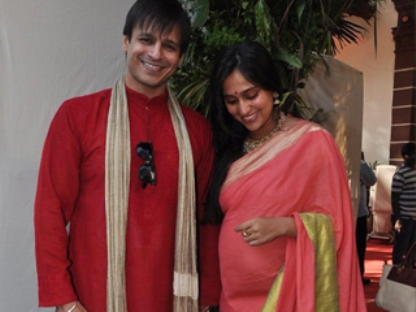 Bollywood actor Vivek Oberoi and his wife Priyanka are now proud parents to a baby boy. The overjoyed father informed the world about the arrival of his son on the social networking site Twitter.

The ‘Qurbaan’ actor, on February 6, 2013, tweeted, “Today is the most special day of my life! Priyanka and I welcomed our little angel into our world, a beautiful, healthy, divine baby boy”. Oberoi also thanked all his fans and well wishers for their blessings and prayers.

The couple was congratulated by several Bollywood celebrities including Genelia D’Souza, Riteish Deshmukh, Kumar Taurani and Sangeeth Sivan. Priyanka is the daughter of the late Karnataka Minister Jeevaraj, while Vivek is the son of veteran actor Suresh Oberoi.

Since the announcement of his wife’s pregnancy, the ‘Saathiya’ star has been excited about his impending fatherhood. In an earlier interview the actor said that the moment he came to know that his wife was expecting a child he decided that he wanted to be a part of the whole process. The ‘Krrish 3’ actor used to accompany his wife for routine checkups and tests and even accompanied her while shopping for diapers. Despite his hectic schedule, the actor said that he is all set to take on the new role of a father.