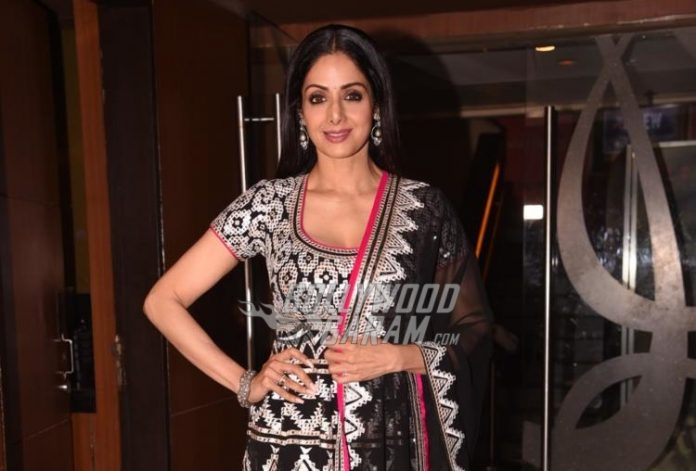 Sridevi getting back to the big screen with MOM

Veteran Bollywood actress, Sridevi is once again ready with another movie that will see her on the big screen, and the title for it is MOM. The ethereal beauty revealed the first look of the movie through social media. MOM is directed by Ravi Udaywar and is produced by Sridevi’s husband, Boney Kapoor.

When a woman is challenged… Here's presenting the first look of MOM. #MOMFirstLook pic.twitter.com/taaJBeDH1d

The official poster for MOM shows Sridevi with the equivalent of “mother” written in different languages. It looks like an intense role that she will be playing. And for her, this will be a milestone, considering that MOM will officially be her 300th film in the industry!

The movie, MOM, also stars Abhimanyu Singh, Akshaye Khanna, Pitobash Tripathi and others. Actor Nawazuddin Siddiqui will be seen playing a cameo in the flick.

Reports say that the production of ‘MOM’ was not easy as it faced several obstacles. The makers of the movie had to stall the shoot of the flick as it featured Adnan Siddiqui and Sajal Ali in important roles.

Sridevi was last seen in the movie English Vinglish directed by Gauri Shinde. The actress had then played the role of a homemaker turned small time businesswoman, who wishes to learn English. In extremely good related news, Sridevi’s daughter that she shares with filmmaker husband Boney Kapoor, is also ready to debut in Bollywood and is reportedly roped in for the Hindi version of the Marathi blockbuster movie Sairat. The Hindi version of the Marathi flick will be produced by Karan Johar. No official announcements have been made so far.

The movie MOM is all set to hit theatres on July 14, 2017.
Photo Credits: Viral Bhayani