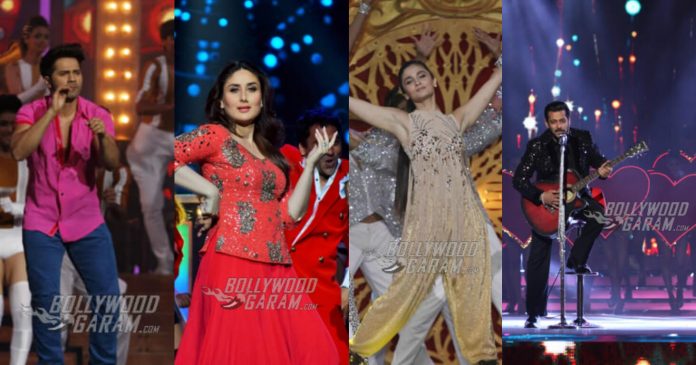 Catch a glimpse of all the live performances from Zee Cine Awards 2017 before it airs!

The Zee Cine Awards 2017 were held on March 12, 2017 at Jio Gardens in Bandra Kurla Complex, Mumbai. It was a star studded affair as the who’s who of Bollywood were in attendance at the awards night.

Hosted by stand up comedian Bharati Singh and VJ Manish Paul, it was an entertaining night with Amitabh Bachchan, Pink and Alia Bhatt taking away the biggest awards. Keeping with the tradition of Bollywood award shows, several live performances by Varun Dhawan, Sunny Leone, Alia Bhatt, Kareena Kapoor and Salman Khan kept the live audience hooked to their seats!

See the complete list of winners from Zee Cine Awards 2017

While you can catch all the performances by your favorite stars on this Saturday, here’s a glimpse of what went down at the Zee Cine Awards 2017 –

Sunny danced to a medley of her songs and even did a costume change in-between her performance. See our exclusive coverage of Sunny Leone’s performance

New mom Kareena Kapoor returned to the stage after a whole year and was super excited about her performance. While talking to a leading daily Indian Express she said, “I’m performing after a year. So that’s even more exciting. I am paying tribute to my favourite four Khans.” This was her first stage performance post motherhood and she absolutely nailed it!

She performed on her hit songs in which she starred opposite Aamir Khan, Salman Khan, hubby Saif Ali Khan and Shahrukh Khan. Songs that were a part of her performance include Chammak Challo and Zoobi Doobi among others.

Kareena was roped in last minute by show organizers after Katrina Kaif backed out, owing to a neck injury suffered on sets of Jagga Jasoos.

The duo has worked in several films together and reunited for a memorable performance on hit song, Kisi Disco Mein Jayein, among others. Govinda made a grand Hero like entry on stage, riding a motorbike. It was a nostalgic trip for many viewers!

Bollywood star Salman Khan stole the show with his act as he sang and danced for the audiences at Zee Cine Awards 2017. He made a grand entry on stage with his hit title track from Sultan. He entered the stage on a platform which was pulled by 10 – 20 men!

He then danced to his 2015 hit sing Hangover and even sang a few line from it, leaving the audience mesmerized.

Recipient of the Best Actor (Female) Award, Alia Bhatt paid an emotional tribute to her mentor, Karan Johar with her performance. She danced to a few old hits of Dharma Productions including, Koi Mil Gaya from Kuch Kuch Hota Hai. The actress couldn’t control her emotions after the act and said, “Dharma is family to me and Karan Johar is like my father, so this act is very special for me.”

Alia has always considered Karan Johar a father figure and recently while talking about the birth of his twins she said that Yash and Roohi are like her brother and sister and she would love to see them grow up.

Reportedly, Alia suffered a minor wardrobe malfunction while performing as a part of her wig fell off while performing. But Alia continued the act undeterred and won the audience’s heart.

Badrinath aka Varun Dhawan performed to a medley of his hit songs including, Besharmi ki height and kept the audience highly entertained with his power packed performance.