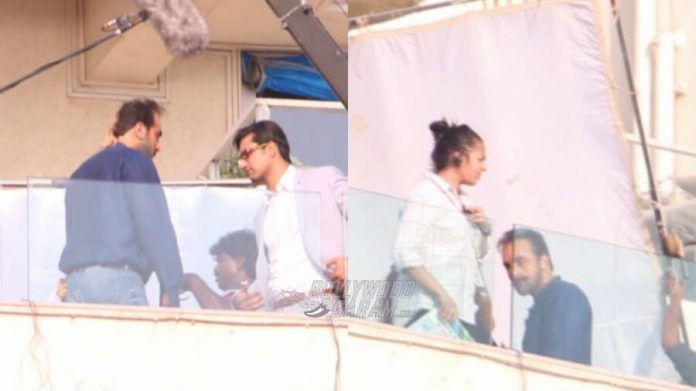 Going by Ranbir’s looks from the sets, it can be said that the actor has surely worked hard to look like the Munna Bhai M.B.B.S. star. Ranbir has been seen a number of times shooting for the movie and was every time seen in a different look. Initially, Ranbir was seen in Sanjay’s debut days look and then he was seen in the Jail period look and now the actor can be seen in Sanjay’s post jail days. The makers are trying their best to keep the entire shoot under wraps.

The upcoming biopic also stars Anushka Sharma and Sonam Kapoor. There are also reports that Dia Mirza will be seen playing wife Manyata Dutt’s role. The upcoming film is directed by Rajkumar Hirani and produced by Vidhu Vinod Chopra. During an interview, Rajkumar Hirani revealed that before they started shooting for the film, he provided Ranbir Kapoor with over 20 hours of footage on Sanjay Dutt to help him mimic and understand his antics! The actor even walked up the stage at Lokmat Maharashtrian of the Year Awards 2017 yesterday, imitating Sanjay Dutt’s walk, to accept his award for Outstanding Entertainer of the Year.